The Young and the Restless Spoilers: Wednesday, June 27 – Ashley and Victoria’s Desperate Strategy – Cane and Jack’s War Heats Up 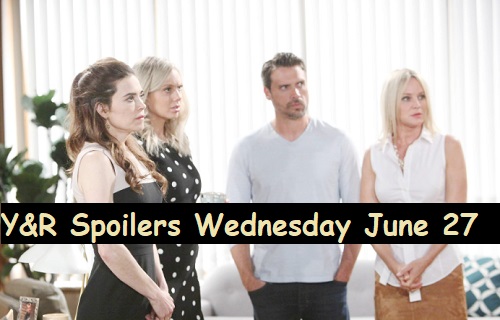 The Young and the Restless (Y&R) spoilers for Wednesday, June 27, tease that Cane (Daniel Goddard) will stand his ground. He believes Jack (Peter Bergman) poses a threat to Chancellor Industries, so he’s not going to sit back and accept changes. Cane’s getting ready for a fierce fight!

Dina (Marla Adams) believes Phillip Chancellor (Donnelly Rhodes) is indeed Jack’s father, but that obviously won’t be good enough for Cane. He still won’t be keen on letting Jack exhume Phillip’s body either. Cane will just want Jack to give all this a rest, but that’s not going to happen. Jack’s determined to prove the truth and make some power plays, so Cane had better brace himself for more trouble.

Y&R spoilers say Jack and Cane will have a major confrontation on Wednesday. They’ll make their positions clear as this war heats up. On a calmer note, Devon (Bryton James) will share a tender moment with Hilary (Mishael Morgan). He’ll confide in his “baby mama,” so maybe this is about their impending bundle of joy. Devon might discuss all his hopes and dreams for their little one.

Sadly, The Young and the Restless spoilers say a terrible tragedy’s brewing. Thanks to Mishael Morgan’s decision to leave the show, a heartbreaking miscarriage seems inevitable. It sounds like Y&R fans should prepare for plenty of tears down the road.

In the meantime, Ashley (Eileen Davidson) and Victoria (Amelia Heinle) will remain concerned about a threat. Newman Enterprises is under attack, so they’ll have to find a way to handle the crisis. It’s no secret that Victoria and Ashley don’t get along, but they’ll put their issues aside in Wednesday’s episode. Ash and Victoria will come together as a team, so let’s hope they can come up with a solid strategy.

As new evidence surfaces regarding J.T.’s whereabouts, Victoria should get even more worried. The cover-up crew buried his body, so what’s up with all this? It appears someone out there is resorting to dirty tricks. Victoria and the rest of the girls’ night gang are in for a shock soon enough.