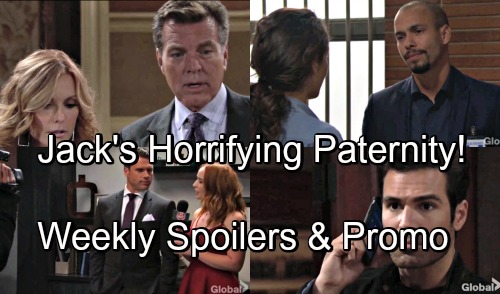 The Young and the Restless (Y&R) spoilers for the week of September 10-14 tease that some shockers are coming up in Genoa City. For starters, let’s talk about Rey (Jordi Vilauso). As his J.T. (Thad Luckinbill) investigation revs up, Rey will focus on Nick (Joshua Morrow). He’ll convey his plans over the phone and suggest that he’s making his move soon.

It turns out Rey’s a cop, so big trouble’s brewing. Nick’s becoming his top suspect at the worst possible time. While Rey prepares a bombshell, The Young and the Restless say a launch party will get underway. Mariah (Camryn Grimes) will be on hand to interview Nick, Dark Horse’s CEO and founder. She’ll give GC Buzz viewers a glimpse of the new offices as Nick’s supporters look on.

Unfortunately, this bash will take a terrible turn. Y&R spoilers hint that Nick will be arrested before the evening’s over. It seems that impersonation plot will trip him up initially, but more accusations could follow.

Meanwhile, Devon (Bryton James) will finally pay Lily (Christel Khalil) a visit in prison. She’s struggling to adjust to life behind bars, especially since she’s still battling so much guilt. Devon will offer some sweet words that catch Lily off guard. She’ll wonder if he’s saying that he forgives her.

Devon will seem torn, but he might admit that he’s inching in that direction. He’s truly trying to accept the past and move on. Over with Kyle (Michael Mealor), he’ll get a chance to collect his bet winnings. Kyle will kiss Summer (Hunter King) in a hotel suite, but she’ll pump the brakes a bit. Summer will suggest that she loves foreplay, so Kyle should kick his shoes off and get comfortable.

Kyle would rather get down to business, but Summer loves her little games. She’ll make Kyle earn his sex session, so Y&R fans should expect some fun scenes. Elsewhere, Jack (Peter Bergman) will ponder his paternity mystery. He’ll tell Lauren (Tracey E. Bregman) he has reason to believe his father’s in an old photo.

A stunned Lauren will point out that her own father’s in there as well. She’ll argue that it’s a young Neil Fenmore, so Jack will be concerned. He’s slept with both Lauren and Jill (Jess Walton) before, so this isn’t what he wants to hear.