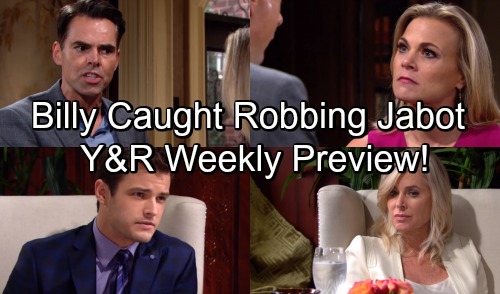 The Young and the Restless (Y&R) spoilers for the week of September 17-21 tease that Billy (Jason Thompson) will be in serious denial. His life’s on the verge of falling apart, but he just can’t see it. Billy has convinced himself that he can handle his gambling addiction. He knows he’s hooked on the thrill of all this, but he doesn’t think it has real power over him.

Alas, Billy’s about to see how wrong he is. He’ll fall into Kyle’s (Michael Mealor) trap and set himself up for trouble. The Young and the Restless spoilers say Kyle will get in touch with a buddy. This guy works with bookies, so he’ll be able to score a specific invite for Billy. Kyle will provide an email address, so Billy will get an invitation to an elite gambling circle.

As expected, Billy will join the group. He’ll feel like this is his chance to recoup his losses and win big time. Unfortunately, it’ll all be part of Kyle’s grand plan. It appears Billy’s wallet will take another hit, so he’ll have to dip into Jabot funds until it gets sorted out. That’s where Kyle will hope to trip Billy up.

Y&R spoilers say Gloria (Judith Chapman) will be a reluctant player in this plot. Kyle will push her to give him the password for Billy’s financial records. Gloria won’t want to get involved, but Kyle will insist that it’s in her best interest. He’ll make Gloria think Billy could use her as the scapegoat for all this.

Gloria will finally give Kyle the info he’s seeking, so he’ll check out the records and find exactly what he wanted. There’ll be a $500,000 wire transfer from Jabot to a gambling organization. Bingo! Kyle will feel like he’s hit the jackpot himself. He’ll immediately go tattle to Ashley (Eileen Davidson) and argue that Billy needs to be forced out.

Ashley will be hesitant to hurt her brother, but Kyle will refuse to back down. He’ll contend that Billy’s stealing from the company and taking unnecessary risks. While Ashley mulls over her next move, Phyllis (Gina Tognoni) will stage a one-on-one intervention. She’ll have tears in her eyes as she sits down with Billy and suggests this is starting to feel dangerous.

It won’t take long for Billy to lash out. He’ll snap that if Phyllis wants to be with him, that’s fine. If she doesn’t, then that’s her call, too. Billy will make it clear that this is who he is, so Phyllis should take him or leave him.