The Young and the Restless Spoilers: Is Hunter King Taking Another Leave From Y&R – Goodbye to Summer? 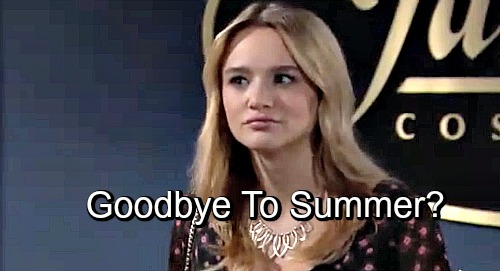 The Young and the Restless spoilers document all things character and actor related. As Y&R fans know, Hunter King’s (Summer) other job, portraying Clementine on Life in Pieces, has created the need for her to take leaves from Y&R’s cast during the past handful of years. Considering Victor’s (Eric Braeden) job offer to his granddaughter, is it reasonable to believe that King will be temporarily exiting the cast again?

Life in Pieces was renewed for the current season, but only received a half-season order, rather than a full-season greenlight. So all actors associated with that sitcom obviously aren’t required to work as many days this go-round.

King was temporarily replaced by Bayley Corman in the fall. She played Summer for three consecutive episodes in October while King was working the other show. Interestingly, Y&R inserted the announcement about Summer being played by Corman both at the traditional first appearance of the new actor and also at the midpoint of each episode. Based on memory, that was the first time two announcements were made for any type of recast.

There is a contingent within Y&R’s audience that doesn’t like Summer and would like to see her take Victor’s offer and never return. That collective emotional feeling can be pinned to what developed in 2014.

As devoted daytime fans know, Michael Muhney’s (Adam) unexpected termination in December 2013, was followed by an initially anonymous source claiming that an on-set conflict between Muhney and King was tied to Muhney’s forced exit. Y&R and King never affirmed that claim.

However, Muhney hired a private detective who tracked down the source, proving to be a person who was not in the industry and had no direct knowledge of any actual facts. Earlier this year, in response to some individuals continuing to further the debunked claim, Muhney took to social media. He urged fans to support King upon her then-coming return to Y&R.

Addressing a more objective point, Summer’s storyline paths have seemed to wrap within recent weeks. Her obsession with Billy (Jason Thompson) ended disastrously and did not lead to a Silly coupling. Also, Summer’s play for Kyle (Michael Mealor) has been cut off at every turn by her former boyfriend. He’s fully committed to Lola (Sasha Calle) now.

So, with no current personal storylines, all Summer is left with is her job at Fenmore’s. That’s why it’s reasonable to guess, which is what’s being projected, that Victor’s offer easily teases Summer soon leaving Genoa City.

Could Y&R establish a cliffhanger with this character before she goes? Of course, as some type of pregnancy storyline involving Kyle could be teased. Then again, maybe Summer will be softly written out, as she was in 2016, when King voluntarily dropped to recurring status, but was never taken off Y&R’s cast page.

Regarding her efforts since returning earlier this year, King is offered kudos for working her character in a vastly different way than she’d been presented before. This actor demonstrated range and performed consistently. All soap fans of goodwill appreciate her and the show.