The Young and the Restless Spoilers: Wednesday, November 28 Update – Abby’s Rage Erupts – Sharon’s Sweet Gesture – Ana’s Back with a Plan 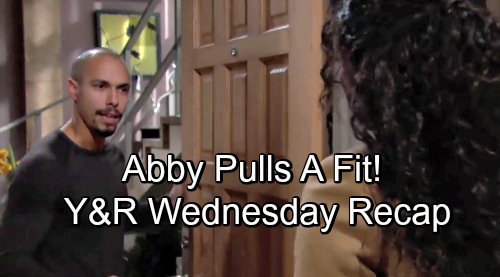 The Young and the Restless (Y&R) spoilers update and recap for Wednesday, November 28, tease that Ana Hamilton’s (Loren Lott) return will shock Devon (Bryton James). He’ll happily greet his sister at home and learn all about her plans. Ana will mention that Neil (Kristoff St. John) advised her to come back and work as Devon’s assistant. He’ll love the idea, so it seems Neil’s plan will pay off.

Afterward, Ana will speak with Nate (Brooks Darnell). She’ll note that Devon didn’t seem too depressed, but Nate suggest there’s more to the story. Devon’s really hurting, even if he doesn’t always let people see it. Nate will hope that having Ana around can stop Devon from spiraling out of control.

At the coffeehouse, Mariah (Camryn Grimes) will chat with Sharon (Sharon Case). They’ll naturally talk about Tessa (Cait Fairbanks), who’s been fired from her barista job. Mariah will get why Sharon had to do it, but she won’t know if she can cut ties romantically. Sharon will suggest that only Mariah’s heart holds the answer.

Soon after, Mia (Noemi Gonzalez) will corner Mariah and start asking about GC Buzz. Mariah will be eager to wiggle out of the awkward conversation. Next, Y&R spoilers say Rey (Jordi Vilasuso) will make plans with Mia in front of Sharon, which will leave her a bit glum. Once they’re alone again, Mariah will voice her support for Sharon. She’ll want to be there for her mom if she’s having a rough time.

Sharon will confess that something might’ve been brewing with Rey, but it can’t happen now. She’s giving him space to repair his relationship with Mia. Later, Sharon will hand over a gift card to Rey. She’ll suggest he should take Mia to Top of the Tower with it.

Rey will do just that, but there’ll be a hiccup during this evening out. When Rey steps away, the waitress will call Mia by Sharon’s name. It’ll be on the gift card, so Mia will undoubtedly be bothered by it. Nevertheless, Mia will keep quiet and focus on her marriage. At home, Rey will point out that they have to go slow. He’ll promise to let Mia know when his heart has healed enough to move forward.

At Jabot, The Young and the Restless spoilers say Kyle (Michael Mealor) will brush off Lola (Sasha Calle). He’ll take the sandwich she offers, but ignore her while he’s on the phone. The client on the other end will request a lunch meeting, so Kyle will have to leave his sandwich behind. When Lola spots it, she’ll obviously assume Kyle’s putting up walls because of her virginity admission.

Once Kyle’s meeting wraps up, he’ll track down Mariah for advice. Kyle will bring up Lola’s confession and how it creates some pressure for him. Mariah will tease Kyle about his big ego and suggest that Lola must have good reasons for waiting to have sex. She’ll push Kyle to ask Lola about her decision and accept that she’ll need some time.

Over with Abby (Melissa Ordway), she’ll tell Arturo (Jason Canela) about a business deal she has in mind. Arturo won’t be all that supportive, but Abby will feel confident in her abilities. Soon after, Lola will ask Abby for some advice…for her “friend.” Lola will mention that this fake pal is a virgin, but it’ll quickly become clear to Abby that Lola means herself.

Lola will mention how things get complicated once sex is introduced. She’s also been waiting on the right guy. Abby will insist that a conversation with Kyle would help. Once Kyle’s had time to wrap his head around it, Abby will think they can get on the same page.

Finally, Abby’s business deal won’t pan out. When she fails to score the property she wanted, she’ll rage about how it all went down. Abby will be upset over Victor (Eric Braeden) picking Summer (Hunter King) for the UAE job as well. After a pep talk from Arturo, Abby will feel better about the situation.