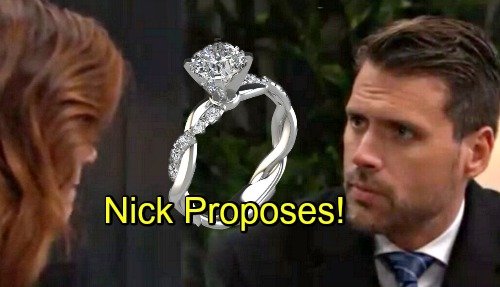 The Young and the Restless (Y&R) spoilers tease that Nick (Joshua Morrow) and Phyllis (Gina Tognoni) will continue their whirlwind romance. What started out as a hookup they had to hide turned into a wedding explosion. After Sharon (Sharon Case) exposed Phyllis and Nick’s betrayal, both “Shick” and “Philly” blew up.

Now Sharon and Billy (Jason Thompson) are on new paths, so Phyllis and Nick have found one of their own. It didn’t take long for them to have sex again, which led to Nick asking Phyllis out on a date. Next thing you know, they were declaring themselves a Genoa City power couple.

A few episodes later, Phyllis was moving in Nick’s brand-new home. If this pace keeps up, Y&R fans know exactly where this story’s headed. Will Nick pop the question soon? It doesn’t seem unreasonable based on his behavior thus far.

Plus, it’s clear that Phyllis is having a few doubts at this point. After Sharon found out they were living together, she was visibly upset. Sharon told them to enjoy their housewarming and took off, which left Nick in a funk while he played videogames with Phyllis.

The Young and the Restless fans can see that Nick’s hung up on Sharon. Phyllis isn’t stupid, so she can see it, too. That’s why she gave Nick an out and suggested she didn’t have to live with him if he wasn’t ready. Nick insists he’s all in, but he may feel the need to prove it before long. That’s especially true since Phyllis is keeping some major secrets, which could leave Nick feeling distant from her.

In addition to the deadly J.T. (Thad Luckinbill) cover-up, Phyllis will find something else to hide by the end of the week. It could be about Sharon or perhaps Victor (Eric Braeden) and his job offer to Summer (Hunter King). Regardless, The Young and the Restless spoilers say it’ll set the stage for trouble.

Nick may sense that Phyllis is putting up walls and assume there’s a quick way to tear them down. He might feel like proposing would ease Phyllis’ mind about his commitment to her. However, that plan could actually backfire. It might make Phyllis accept the truth instead.

When it comes down to it, Phyllis is a Sharon stand-in. That’s why Nick’s brushing past all the usual couple milestones at lightning-fast speed. It seems like Nick just wants to fill the void in his heart and recreate some kind of “Shick” love. Nick is obviously using Phyllis and she’s letting him!

Do you think a “Phick” proposal’s coming up soon? If Nick asks Phyllis to marry him, will that be what finally makes her pump the brakes? We’ll give you updates as other Y&R news comes in. Stay tuned to the CBS soap and don’t forget to check CDL often for the latest Young and the Restless spoilers, updates and news.