The Young and the Restless Spoilers: Is It Possible J.T. Hellstrom Is Still Alive – How Could It Be?

BY Sean O'Brien on November 10, 2018 | Comments: one comment
Related : Soap Opera, Spoiler, Television, The Young and the Restless 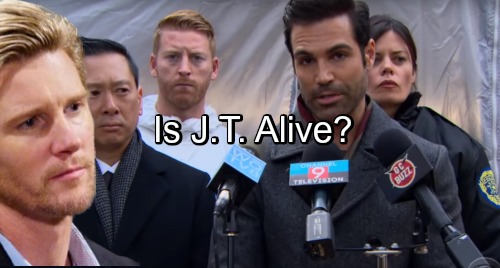 History would have to be rewritten in order for this plot point to actually prove true. It would go something like what’s shown below.

J.T. did not return to Genoa City late last year, or was, at some point supplanted. He had an unknown twin, who turned soapily evil, or was replaced by a doppelganger for an unexplained reason.

It’s completely understandable that Y&R fans would laugh hysterically at this suggestion, or cite past instances where body-doubles were utilized. Yet, readers of this comprehensive site know that Thad Luckinbill actually has a real life identical twin.

Trent Luckinbill and his look-a-like brother served as producers of the smash Hollywoodland movie ‘La La Land’. Intriguingly, they also played identical twins on the last-ever episode of ‘Law & Order: Criminal Intent’. That swan song chapter had them play identical twins who were murdered.

The Luckinbill brothers also hold dual Y&R credit ratings. Trent’s past work will be explained later. Of course, Thad played J.T. from 1999-2010, before returning in late 2017. His choice proved gutsy, as the character he played was quickly written into a monster.

J.T. went mad, eventually attacked Vickie (Amelia Heinle) and was accidentally killed by Nikki (Melody Thomas Scott) and then buried by both women, along with Phyllis (Gina Tognoni) and Sharon (Sharon Case) in Chancellor Park. Ever since then the coverup crew and their viewers assumed that no human being could have dug his way out of the unlawful grave. And that’s true.

However, if J.T.’s identical twin, or some other type of exact resemblance, had, for some reason assumed Mr. Hellstrom’s life, then he, not J.T. lost his life and was buried last spring. That type of scenario isn’t really a stretch considering the existence of Thad’s brother, unless, of course Thad will be revealed as having played a dual role. As for the recently revealed DNA evidence that is said to be J.T.’s, well, that could simply be related to the watch he owned.

But why not shock the audience by having Trent appear for a second time on the show, complete with social media photos showing both men together? Oh yes, Trent was a prior member of the cast, appearing in an uncredited role in 2005. So maybe 2018 is serving as his cast comeback and will allow Thad to be seen again as J.T. Hellstrom.