The Young and the Restless Spoilers: Sharon and Rey Heat Things Up as Wife Mia Arrives – Big Trouble Begins

BY Heather Hughes on November 10, 2018 | Comments: one comment
Related : Soap Opera, Spoiler, Television, The Young and the Restless 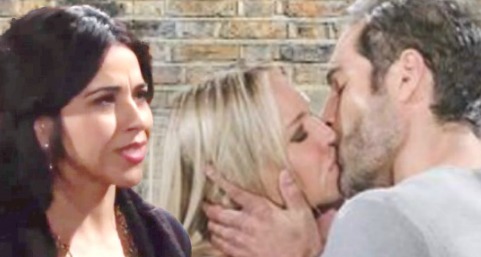 The Young and the Restless (Y&R) spoilers tease that temptation may become too much for Sharon (Sharon Case) and Rey (Jordi Vilasuso) to bear. They’ve been bonding like crazy, which is a sign that things are about to take a steamy turn. After an almost kiss in Thursday’s episode, Rey and Sharon seem poised to cross the lip line soon enough. Perhaps they could even give Rey’s new mattress a test run!

Thursday also brings an outburst over a Nick (Joshua Morrow) and Phyllis (Gina Tognoni) sighting at Crimson Lights. Sharon snaps that when given the choice between right and wrong, she doesn’t choose another woman’s man. She follows it up with that near kiss we mentioned, so that isn’t a good sign!

Y&R will probably make Sharon a hypocrite soon enough. We can’t forget that Rey is still married. He’s estranged from his wife, but they’ve been trying to make progress over the phone. Nevertheless, Sharon’s right there in the flesh and Rey’s drawn to her kind spirit. She may be on the verge of helping him cheat, but she truly cares about people and tries to help those in need.

Will Rey cave in and finally lock lips with Sharon? Maybe their relationship will take a hot turn just as Rey’s wife, Mia (Noemi Gonzalez), arrives. She’ll show up on the new Y&R episode Monday, November 12, so it’s the perfect time for Rey to be caught between his past and his future. We all know The Young and the Restless is pushing “Shey” as the pairing to root for here.

Even if Rey and Sharon don’t cross the line just yet, they may once Mia and Rey inevitably butt heads. Sometimes distance makes the heart grow fonder, but it’ll probably just lead to bitterness and conflict in this case. The harder Rey and Mia try to reconnect, the more likely it becomes they’ll fall apart.

Bottom line, it won’t be long until Sharon and Rey are doing the horizontal mambo. Marriage or no marriage, their spark is just too tough to deny! The Young and the Restless spoilers say the J.T. (Thad Luckinbill) case will bring additional drama, but we have no doubt that Rey and Sharon will push through it. Now that Nick’s in the rearview mirror, Rey’s next in line for love.

Are you anxious to see some sexy scenes for Rey and Sharon? Are you rooting for them as a new couple? We’ll give you updates as other Y&R news comes in. Stay tuned to the CBS soap and don’t forget to check CDL often for the latest Young and the Restless spoilers, updates and news.

Characters on #YR – they’re just like us! Find out more about how some of the cast relates to the who they play. Which resident of Genoa City do you relate to the most? pic.twitter.com/3H2I8N4jpH