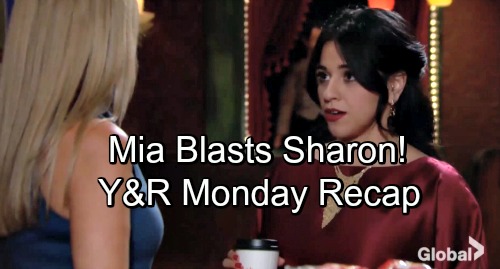 The Young and the Restless (Y&R) spoilers update and recap for Monday, November 12, tease that Rey (Jordi Vilasuso) will keep Sharon (Sharon Case) at a distance. That’ll be partly to avoid awkwardness and partly because he intends to grill Nick (Joshua Morrow). In the interrogation room, Rey will ask Nick about the last time he saw J.T. (Thad Luckinbill). He’ll imply that Nick might’ve killed him, which will bring outrage.

Once their conversation wraps up, Nick will corner Sharon and chew her out over Rey’s actions. He’ll feel like Rey’s only going after him because of her. Sharon will decide to confront Rey, which will lead to a fierce argument. They’ll finally decide they don’t want to screw up their friendship, but Rey will take things a bit too far. He’ll plant a passionate kiss on Sharon, but she won’t seem to mind!

Next, Rey will ask Nikki (Melody Thomas Scott) where Victor (Eric Braeden) is. He’ll want to question him about J.T.’s murder, but Nikki will reveal that he’s out of town. Rey will want Victoria to contact him ASAP. Naturally, Nikki will assure the detective that Victor’s not to blame. Once she’s gone, Sharon will agree to join Rey at his place later. They’ll have a lot to figure out.

In the meantime, Rey will have a chat with Victoria (Amelia Heinle). She’ll feign innocence, but it won’t be long until she slips up. Victoria will mention J.T.’s watch and wonder if the cops discovered anything more. Rey will only tell her the watch was found after J.T.’s death. He won’t share how he knows it.

The Young and the Restless spoilers say Victoria will keep pushing. She’ll mention J.T.’s DNA, so Rey will phone someone afterward and talk about Victoria’s suspicious reaction. At home later, Rey’s wife will show up and announce that she missed him. Mia (Noemi Gonzalez) will insist that she wants to be together, but Sharon’s arrival will put their discussion on hold.

After Sharon’s introduced to Mia, she’ll pretend she’s there for landlord duties and head out. Mia will seem convinced there’s more to the story. Across town, Mariah (Camryn Grimes) and Tessa (Cait Fairbanks) will be enjoying their new living arrangement. When Mariah suggests she’ll sort out the closet situation later, Tessa will insist that’s just fine.

After Mariah returns from a meeting, she’ll pull out the bag that previously had the cash stash. The money will be gone, so she’ll be out of the loop – at least briefly! Things will take a shocking turn later when Mariah surprises Tessa with a new mattress. Y&R spoilers say Tessa will fly into a rage and demand to know where the old one went. She’ll learn it’s by the dumpster outside.

Tessa will shout that Mariah had no right to throw away her belongings. She’ll stomp off, so Mariah will call Kyle (Michael Mealor) for advice. He’ll think Tessa must feel like a charity case. Afterward, Kyle and Lola (Sasha Calle) will plan to attend the Jaboutiques launch party together. Nick will meet up with Phyllis, who’ll have the same idea. They’ll think they can make a major power couple display.

Back with Mariah, she’ll find an apology note from Tessa at home. When Mariah takes some trash out to the alley, she’ll spot Tessa frantically moving cash from the mattress to a bag. Mariah will step out of sight as she watches in shock.