The Young and the Restless Spoilers: Is Rey Working For Paul – Undercover Officer, Mystery Connection to J.T. Revealed?

BY Sean O'Brien on August 27, 2018 | Comments: one comment
Related : Soap Opera, Spoiler, Television, The Young and the Restless 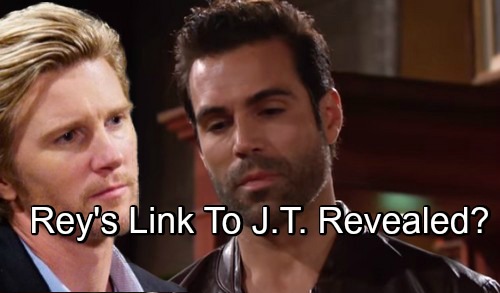 The Young and the Restless spoilers tease that Rey (Jordi Vilasuso) may be linked to Genoa City’s Chief of Police, Paul Williams (Doug Davidson). However, Y&R may have implied that link in order to throw viewers off.

Little progress has been made since Vickie appeared to admit what really happened. Her song and dance routine led Paul to believe that she’d helped J.T. escape town because she still loved the lug and was also afraid of him. Actually, Vickie was lying to protect her mother, Phyllis, and Sharon by misdirecting the investigation, thereby also removing the other ladies from potential suspicion.

Days after Vilasuso’s character was introduced, Paul saw Vickie at Crimson Lights. He sat down in the atrium-like area of the seemingly pricey beverage and light snack establishment. Vickie was unable to immediately answer why she hadn’t requested an update from Paul in recent weeks.

Paul walked by Rey just moments before that conversation with Vickie. Davidson’s long-tenured Y&R character picked up something that either fell on the floor, or was put there as a signal, and handed it to Rey. Neither character made eye contact with the other, interestingly.

A comparison between Vilasuso, who just joined the cast, and Davidson was noteworthy. Davidson first appeared on Y&R in 1978 and has since gone on to be part of nearly three-thousand episodes. Yes, forty years on this soap!

Rey appears to be either working with Paul, as a clandestine agent, or is some type of freelance private detective. But why would he be conducting what seems to be his own side, or sole investigation of J.T. Hellstrom, which he’s now admitted to doing?

The introduction of Arturo’s (Jason Canela) brother has also opened a door to GC’s newest family, the Rosales’. So, Canela’s character wasn’t simply the new guy in town who had an unusual plot-fit dalliance with Nikki, but then moved onto a better placement with Abby (Melissa Ordway). Instead, he was the first member of this fictional Wisconsin town’s newest clan.

The first scene Rey appeared in had him staring at a board, where all known, seeming suspect’s photos surround one of Luckinbill’s devolved character. How Rey came to know that J.T. was missing must be related to some type of business connection, though it’s certainly possible that it could be personal.