The Young and the Restless Spoilers: What Does Rey Know About Arturo – Deep Secrets Revealed 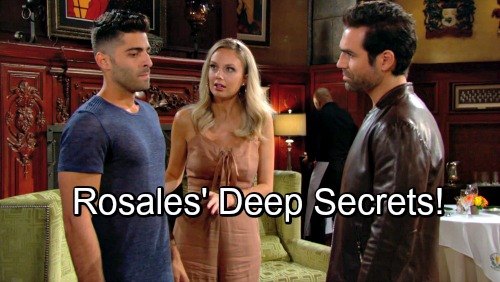 The Young and the Restless spoilers tease that Arturo Rosales (Jason Canela) apparently has been hiding a number of important facts about his life. Unless Rey’s (Jordi Vilasuso) comments to his revealed brother simple continue past family squabbles?

Rey approached their table after he and his brother spotted each other at Crimson Lights. Arturito, as Rey later dubbed his kid brother, took off, by was trailed by the man who appears to be a freelance private detective.

One other plot point took place at Sharon’s (Sharon Case) iconic coffee house. Rey dropped an item on the floor, which appeared to be unintentional. Paul (Doug Davidson) picked it up and handed it to him. Are those men strangers to each other? If so, then Rey’s presence in Genoa City is actually even more intriguing.

Canela’s addition to the cast produced a fresh face in this Wisconsin town. But, as has now been shown, he was the first part of what appears to be a growing family. Rey becomes Rosales contingent member number two. As hardcore viewers know, Abby also learned, to her embarrassment, that Arturo’s sister lives with him. So, it would be reasonable to expect that she will be introduced to the audience in the future as well.

Regarding whatever Rey knows, it could be as simple as past family dealings. Kid stuff that means nothing now. As both men noted, they haven’t been in touch in two years. So, it’s logical to believe that even if Arturo was in some type of trouble, or connected to more than one disruptive moment, then there’s been nothing in his recent past that Abby needs to worry about.

Considering Arturo’s initial dalliance with Nikki (Melody Thomas Scott), women-related issues could surely be what Rey was referring to. Possibly he helped to extricate his younger brother from multiple interpersonal conflicts, as Rey didn’t seem to be referencing a singular conflict source, or may have battled him for the same lady’s hand.

Because there is bad blood, Arturo would seem primed to reveal information about his brother that could damage the emerging J.T. investigation. That is the introductory storyline reason why Rey exists.

Congrats to Y&R for expanding the number of GC clans. New people means varied storylines can continue to be seen.