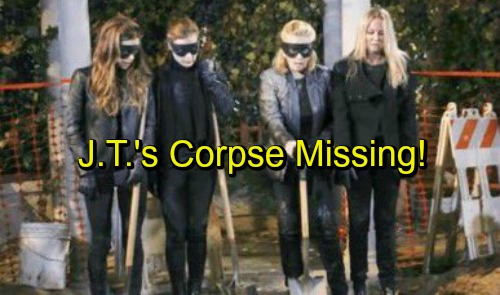 The Young and the Restless (Y&R) spoilers tease that Nikki (Melody Thomas Scott) will get some terrible news. Someone will send her a notice about some damage in Chancellor Park. It turns out there’s a broken pipe and the resulting water leak could bring trouble in more ways than one.

As luck would have it, this broken pipe will be directly under the infamous sculpture. Of course, Y&R fans know there’s a startling secret buried under it. That’s where Nikki, Victoria (Amelia Heinle), Phyllis (Gina Tognoni) and Sharon (Sharon Case) disposed of J.T.’s (Thad Luckinbill) corpse. The artwork sits on top of J.T.’s burial site, but it turns out it won’t be his final resting place.

Due to the water leak, the sculpture will have to be removed. Next week, the girls’ night gang will have a meeting to discuss the drama. They’ll worry about what the repair crew might find once they start digging around. After much deliberation and a good dose of bickering, a decision will be made. They’ll have no choice but to return to the scene of the crime and exhume J.T.’s body.

The Young and the Restless spoilers say Victoria will gripe about it, but she’ll know the others are right. They just can’t let this go and risk a horrifying discovery. However, this mission will come with its own set of problems. Rey (Jordi Vilasuso) is clearly curious about what the ladies might be hiding. They have no way of knowing when they’re being watched.

Rey could easily tail them or send someone else to spy for him. Nevertheless, the plan will have to move forward. Victoria, Nikki and Phyllis will put on some eye masks before grabbing their shovels. They’ll wear all black in hopes of hiding in the darkness. It seems Sharon will serve as a lookout or do some other crucial task before joining them.

Once the women are all together, they’ll prepare to dig. The Young and the Restless spoilers say Victoria will struggle with plenty of pain. Awful memories will come rushing back, so this will definitely be a grueling ordeal. Sadly, things are only going to get worse. The scheming squad will soon face a shocker they never saw coming.

Is J.T.’s body still where they left it? Maybe not based on the sound of all this! It’s possible J.T. somehow survived, but there’s been no buzz about Luckinbill’s return. With that in mind, perhaps someone beat the ladies to the punch. Could Victor (Eric Braeden) have learned the truth and cleaned up the mess? That’s an option worth considering.

Then again, the bombshell might be getting caught in the act. Will another character spot the digging fiasco and demand answers? Could the blackmailer suddenly take a more direct approach and confront them?