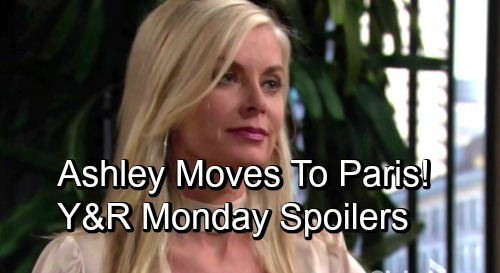 The Young and the Restless (Y&R) spoilers for Monday, October 29, tease that the dreaded moment will finally arrive. Eileen Davidson will officially wrap up her run as Ashley Abbott, so be prepared for a big sendoff. In Friday’s Y&R episode, Ashley decides Jack’s (Peter Bergman) offer isn’t good enough. If she can’t have the CEO spot, she’s taking her patents and leaving her family in the dust.

On Monday, Ashley will reveal where she’s headed. She’ll announce that she’s booked a flight to Paris and will be leaving that night. Naturally, Ashley’s family will try to talk her out of it. They’ll hate the idea of this document tearing the family apart.

Of course, this is about more than just a contract. It’s really about years of resentment and competition. Jack (Peter Bergman) was much closer to Dina (Marla Adams) when they were younger. Ashley always felt left out, but at least she was the apple of John’s (Jerry Douglas) eye.

That left Jack feeling just as jealous though. These siblings managed to keep a decent relationship going for years, but their problems have always been just under the surface. Thanks to a string of corporate incidents, it’s brought all the conflict out into the open. The Young and the Restless spoilers say Jack will hope to resolve it on Monday. He’ll beg Ashley to stay and work through this together.

However, Ashley’s mind will be made up. Will Ash and Jack find some form of peace before she goes? Let’s hope so! It’d be a shame to watch Ashley walk away feeling so bitter and pretty much hating her family. With any luck, Ash will make amends somewhat and still take off to do her own thing.

Naturally, Jabot may be left in a bind. If Ashley sticks to her guns and takes her patents, what will the company’s future look like? They’ll have to figure that out soon enough. It won’t be long until Phyllis (Gina Tognoni) makes an impressive pitch to be CEO. She’ll hope to steer the ship in a less destructive direction.