BY Marcy Cohen on May 13, 2018 | Comments: Leave Comments
Related : Soap Opera, Spoiler, Television, The Young and the Restless 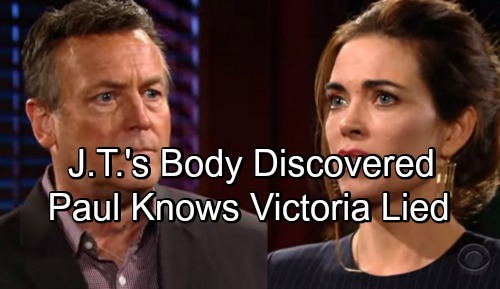 Paul will keep pushing and pushing, so Victoria will finally blurt out an altered version of events. She’ll declare that she’s going to tell Paul everything, but that won’t really be true. Instead, Victoria will provide bits and pieces of what happened that night. She might confess that J.T. indeed came over, but she’ll surely keep quiet about his demise and the coverup.

Paul recently suspected that Victoria might’ve helped J.T. skip town. Could Victoria decide to run with that explanation? She’d get in a little trouble for lying to the cops, but it’d be a good way to throw Paul off track. Victoria would be telling him what he wants to hear.

This could also stop all the investigating around Genoa City. Nick (Joshua Morrow) and any other interested Y&R characters could focus their efforts elsewhere. That’d take some of the pressure off Victoria, Sharon (Sharon Case), Nikki (Melody Thomas Scott) and Phyllis (Gina Tognoni).

Maybe Victoria will claim that she indeed helped J.T. bolt. She might contend that he showed up begging for assistance, but wouldn’t say why. Victoria could argue that she made arrangements for J.T. before knowing the whole story. She might express regret for letting him get away and hope Paul buys it.

Paul would undoubtedly look into Victoria’s version of events, so she might have to break down and ask Victor to pitch in. Nikki didn’t want to give Victor any blackmail material, but they may have no choice. You can bet The Young and the Restless cover-up crew will blast Victoria for making a bigger mess.

Unfortunately, things are only going to get worse in the coming weeks. J.T.’s body will inevitably be found and once that happens, Victoria’s bogus claims will be exposed as lies. She’s clearly setting herself up for more problems. Paul will naturally suspect that Victoria had something to do with J.T.’s death.