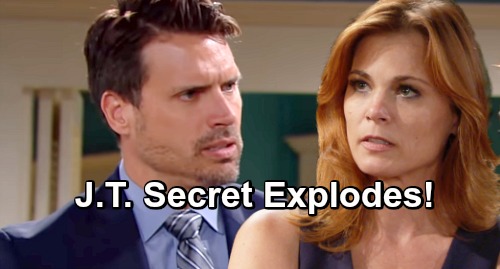 The Young and the Restless (Y&R) spoilers tease that Phyllis (Gina Tognoni) could regret some of her recent choices. Y&R fans know Billy (Jason Thompson) finally settled down and realized he wasn’t done with Phyllis (Gina Tognoni). He was initially furious over her betrayal with Nick (Joshua Morrow), but he ended up doing far worse.

Phyllis rushed into bed with an ex while they were on a break. That’s not so bad, especially by Genoa City standards. Billy, on the other hand, hopped in bed with Phyllis’ own daughter! He used Summer (Hunter King) for revenge and that’s just one hurdle too many for Phyllis. She likes the comfort and stability she’s found with Nick, so she’s sticking with him for now.

However, The Young and the Restless spoilers hint that lies could once again be Phyllis’ downfall. If she had just come clean to Billy right after the Nick sex happened, he might’ve been more understanding. Instead, Phyllis let the secret build and spiral out of control. She’s falling into a familiar pattern with this J.T. (Thad Luckinbill) secret.

In fact, Phyllis is a big reason why the cover-up crew’s stuck in this mess. The others wanted to come clean at first, but Phyllis argued that no one would believe Nikki’s (Melody Thomas Scott) story about protecting Victoria (Amelia Heinle). That seems kind of ridiculous since J.T. had literally just tried to kill Victor (Eric Braeden) twice, but Phyllis isn’t known for her great decisions.

Phyllis made another bad call by fueling Nick’s suspicions about Victor. She wants take heat off the girls’ night gang, but she’s only going to make matters worse once the truth comes out. Of course, Nick has a personal connection to all the key players in this plot. Sharon is his ex, Victoria is his sister, Nikki (Melody Thomas Scott) is his mom and Phyllis is his girlfriend.

Nick will have a good reason to be angry with all of them, but Phyllis could pay the steepest price for her deception. She may not be with Nick for much longer. He’ll probably livid that Phyllis would nudge him toward thinking Victor was guilty of J.T.’s murder. This wasn’t even a murder at all!

When the J.T. bomb eventually drops, will it bring the end of Phyllis and Nick’s relationship? Is “Phick” already doomed? Will this give Billy the second chance he’s dreaming of? We’ll give you updates as other Young and the Restless news comes in. Stay tuned to Y&R and don’t forget to check CDL often for the latest Young and the Restless spoilers, updates and news.