BY Kinsley Goldman on April 9, 2018 | Comments: one comment
Related : Soap Opera, Spoiler, Television, The Young and the Restless 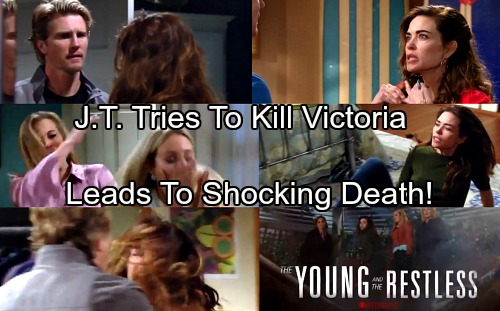 The Young and the Restless (Y&R) spoilers tease that J.T. (Thad Luckinbell) is about to go over the edge! He’ll lose all control after Victoria (Amelia Heinle) washes her hands of him for good. At first, J.T. will try sweet-talking Victoria like he always does. He’ll expect to reel her back in as usual, but she won’t want to hear his excuses and apologies. Victoria will just want J.T. to get out!

J.T. will indeed leave, but he’ll be back later for a more menacing encounter. The Young and the Restless spoilers state that J.T. will once again get physical with Victoria. This time she’ll worry that she won’t survive. J.T. and Victoria will battle in out in some shocking scenes this week. It’s pretty clear that only one of them will make it out alive.

Y&R fans know that J.T. has been himself during this stint. He made mistakes in the past, but not like the ones he’s been making lately! J.T.’s abusive and tends to take deadly action when he doesn’t get his way. Just look at what happened with Victor.

J.T.’s first murder attempt didn’t pan out, so he decided to try again later. The Young and the Restless viewers were shocked when J.T. shut off Victor’s life support. It was definitely a low blow. J.T. insisted that one of them was doing down, but it certainly wasn’t going to be him.

It’s possible that J.T. will take a similar approach with Victoria. He may suggest that if he can’t have her, no one can. J.T.’s controlling enough to have that mindset. When his anger bubbles up, he’s capable of just about anything.

In other words, J.T. may want to do more than just punish Victoria or try to get her back in line. This could be about taking her out of the picture entirely! J.T. told Victoria he’d die if she ever left him, but he might flip that around and suggest she’ll be the one dying instead.

Fortunately, Victoria will manage to get the upper hand with the assistance of some strong ladies. Phyllis (Gina Tognoni) and Sharon (Sharon Case) will arrive to stop the madness. Nikki (Melody Thomas Scott) will make it over to help out as well. She might even bring her gun over to settle this once and for all.