BY Heather Hughes on December 18, 2018 | Comments: one comment
Related : Soap Opera, Spoiler, Television, The Young and the Restless 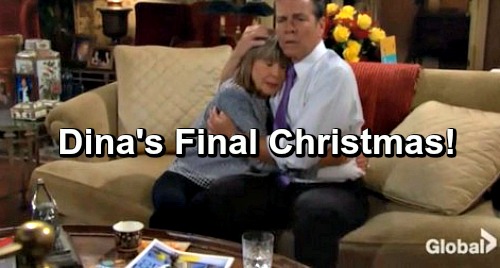 The Young and the Restless (Y&R) spoilers tease that Jack (Peter Bergman) will make time for Dina (Marla Adams) this holiday season. When haven’t seen as much of her lately, but she’s apparently hanging in there. Dina could barely remember anything around the time Ashley (Eileen Davidson) left, but it seems Jack will jog his mom’s memory soon.

Nikki’s (Melody Thomas Scott) accident may remind Jack that life it short and you have to make every second count. That’s especially true with Dina. Every day takes a little piece of Dina’s mind away and marches her toward an inevitable end. It breaks Jack’s heart if he thinks about that too much, but Christmas isn’t a day to be gloomy. Instead, Jack will just want to bring Dina joy and live in the moment.

Y&R spoilers say Jack will do that by reflecting with Dina. He’ll fill in the blanks if she struggles to recall their family history. Dina caused plenty of pain in the past, but Jack still formed a special bond with his mother. That bond remains strong today. It took some work to rebuild it, but Jack has forgiven Dina and intends to focus on the time they have left together.

During the week of December 24-28, Jack will put a smile on Dina’s face. He’ll remind her of some wonderful memories as they discuss the Christmases of his childhood. Jack may even mention some memories he made on his own in adulthood. Despite the drama Dina caused when he was a teen, Jack went on to have a great life. He’s faced many ups and downs, but he’s always found hope in the chaos.

The Young and the Restless spoilers say Dina will appreciate this bonding time with Jack. It looks like she’ll actually be fairly coherent during their conversation. That just might be the best Christmas gift Jack could receive. After all, this could be Jack’s last holiday season with his mother.

Y&R has gotten about all the mileage they can out of Dina’s Alzheimer’s storyline. At this point, it’s just about showing Dina’s steady decline and eventually letting her fade away. That could bring some gripping family drama for the Abbotts in 2019. Eileen Davidson said she might be willing to come back for an appearance down the road, so let’s hope Ashley can return when Dina’s time runs out.