The Young and the Restless Spoilers: Wednesday, December 19 – Desperate Search For Victor as Nikki Fades – Reed and Charlie’s Cover-up

BY Heather Hughes on December 17, 2018 | Comments: one comment
Related : Soap Opera, Spoiler, Television, The Young and the Restless 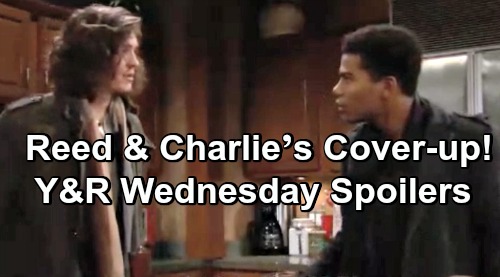 The Young and the Restless (Y&R) spoilers for Wednesday, December 19, tease that Nick (Joshua Morrow) and Victoria (Amelia Heinle) will rev up their search efforts. They’ll know Victor (Eric Braeden) would want to be there for Nikki (Melody Thomas Scott) during this crisis. Victoria and Nick will try everything they can think of to get in touch with Victor and bring him home, but nothing will pan out.

One Newman is unaccounted for and another is dying in a hospital bed, so the stress will take a toll on this family. Victoria and Nick will worry that they could lose both their parents. This definitely isn’t how they wanted to spend the remainder of their holiday season. It’s supposed to be a time of joy and peace, but the Newmans will grapple with sorrow and fear instead.

Of course, Victoria will be even more concerned thanks to an unknown threat. Part of her will wonder if the hit-and-run driver was specifically targeting Nikki. Victoria will think it could be connected to all the J.T. (Thad Luckinbill) drama, so she’ll start to freak out.

Phyllis (Gina Tognoni) and Sharon (Sharon Case) will have to consider that possibility as well. They’ll know there’s a chance that they could be next, so they’ll all be on edge at the hospital. The Young and the Restless spoilers say Phyllis will be particularly fearful. She’ll be convinced that J.T. is back or someone close to the situation wants them all dead.

While Phyllis and the others try to figure out what’s next, Reed (Tristan Lake Leabu) and Charlie (Noah Alexander Gerry) will do the same. In Tuesday’s Y&R episode, Reed finds out he ran over Nikki in Charlie’s car. That’ll leave both Reed and Charlie with some tough choices on Wednesday. They’ll bicker over this horrible situation before finally deciding to hide their trail.

Reed won’t want anyone to know he was behind the wheel with a suspended license. He won’t want his family to know he left Nikki near death either! However, guilt will work its magic over the next few episodes. Reed will cover up what he’s done for now, but that plan will prove impossible to stick with.