BY hellodrdavis on October 23, 2018 | Comments: 2 comments
Related : Soap Opera, Spoiler, Television, The Young and the Restless 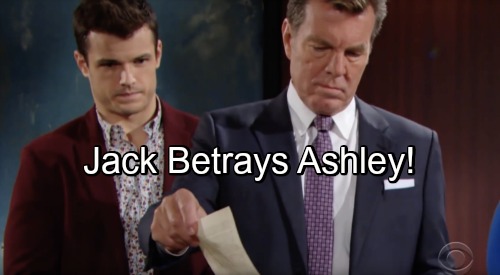 The Young and the Restless spoilers tease that the Abbott family drama has only just begun. The Abbotts have been at each other’s throats lately, with lots of in-fighting and insults hurled at each other. Ashley (Elieen Davidson) in particular has been vocal about the history of mistreatment she feels that she’s suffered at her family’s hands.

Ashley also revealed that she led Jack (Peter Bergman) on a wild goose chase for his biological father, knowing full well that John Abbott (Jerry Douglas) was his true dad. This was all in retaliation for Jack’s behavior toward her through the years, and in particular for his actions related to her own parentage and status within Jabot.

Jack was stunned that Ashley would behave so cruelly toward him, leading him to believe he wasn’t John’s son. But soon he’ll try to get payback. And it will all start when Kyle (Michael Mealor), with Dina’s (Marla Adams) help, finds an official Jabot document that gives Ashley a considerable advantage at Jabot.

The document will officially assign Ashley the rights to all major patents and developments at Jabot. That would give Ashley a significant advantage over her siblings. Kyle will want to shred the document, as he wants to protect what he believes is his rightful share of Jabot, but Dina will stop him. But when Jack sees the documents, he’ll insist that they must be destroyed. He’ll shred away.

It hardly seems like the actions of someone who just recently gathered his family around the breakfast table and professed how the family should stick together, just like John would have wanted. But Jack will be relieved that the document is destroyed.

Unfortunately for him, Traci (Beth Maitland) will discover the document shreds and put them back together, so the terms of the document will indeed come to light. And more family drama will ensue as Ashley realizes that Jack has again tried to deny her what’s hers.

Will the Abbott family drama ever come to an end? Stay tuned to the CBS soap and don’t forget to check CDL often for the latest Young and the Restless spoilers, updates, and news.