BY Sean O'Brien on August 25, 2018 | Comments: one comment
Related : Soap Opera, Spoiler, Television, The Young and the Restless 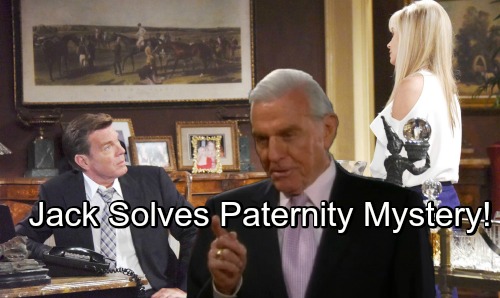 The Young and the Restless spoilers tease that Jack (Peter Bergman) will soon revisit his quest to solve the invented paternity mystery where it was claimed that he wasn’t John’s (Jerry Douglas) son. As will be confirmed, Jack, was, Jack is, and Jack will forever remain a blood Abbott.

In coming weeks, likely bleeding into the fall, Jack will uncover further information. He, along with his own blood son, Kyle (Michael Mealor), will then finally seize on what proves to be the truth.

Yes, paternity tests were conducted where Jack didn’t match with Billy (Jason Thompson), or with Traci (Beth Maitland). But at least one of those characters will prove to be out of the Abbott tree. A one-to-one paternity test, where Jack’s DNA is compared to John’s will have been held back until that plot point.

Now, was the reveal, where Dina (Marla Adams) appeared to tag Jack as some other unknown guy’s son believable? No, because it didn’t fit with logical Y&R history and followed on the fabled Ashley (Eileen Davidson) paternity reveal that took place in the mid-1980’s.

However, the star turn this storyline afforded Adams created some of the more meaningful and memorable scenes in recent Y&R history. Adams was a finalist in the supporting actor category at the most recent Daytime Emmy Awards. Hopefully she wins next year, though General Hospital’s Max Gail (Mike), assuming he submits his name for nomination, is also delivering command performances in a similar arc.

Adams wondrous performances built off her return to this steamer. She and Graham (Max Shippee) knew of her Alzheimer’s diagnosis, but kept it secret. The Abbott clan’s later awareness of it was mixed with Dina’s stunning comments to Abby (Melissa Ordway) earlier this year, where it was claimed that Jack wasn’t an Abbott.

With whatever any hardcore Y&R fan fells as of now, Jack’s paternity dilemma was only temporarily shelved and must be resolved. The only reasonable resolution will see John’s rightful restoration as Jack’s dad.

Much past history would be affected if Jack would actually be written to be the some other man’s sire. The grammatical awkwardness of that last sentence was intentional, as reinventing one of Y&R’s main character’s back stories.

So, Jack will reclaim his Abbott status. That will set him up to return to the throne at Jabot, which would seem to telegraph Ashley’s exit. And, as devoted soap fans know, Davidson is set to depart the cast this fall.