The Young and the Restless Spoilers: Jack’s 2019 Preview – Leap of Faith Promises New Beginnings With Kerry 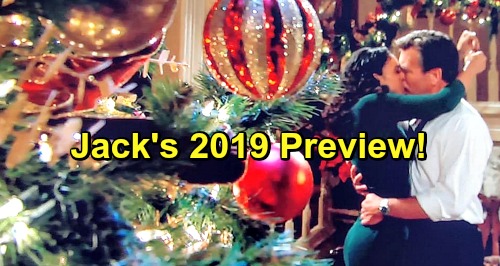 The Young and the Restless spoilers tease that Jack’s (Peter Bergman) 2019 preview shows an interest in starting a relationship with Kerry (Alice Hunter) that isn’t steeped in Jabot-related motives. While Miss Johnson does hold a key position at the family company and Jack hopes to return to work there someday, his intentions toward Kerry are very personal.

Y&R openly teased a Phack reunion for an extended period of time this year. Jack’s interest in reuniting with Phyllis (Gina Tognoni) has been known for awhile. After moving past his rightful feelings, he resolved differences with his former wife. Then, the two became friends again.

Phyllis began using Jack as the same type of sounding board that Billy (as initially played by Burgess Jenkins) served as when she was having troubles with Bergman’s character. As devoted viewers recall, Phack’s 2015 era issues involved Phyllis’ belief that Jack didn’t properly defend her honor after the Marco (as played by Bergman in a dual role) horror was exposed.

Many believed that Phyllis was right to be ashamed of her then-husband’s behavior. In reality, Y&R had written Jack out of character in order to purposely split Phack and create Philly.

All of the above now positions Kerry to have impressed Jack on a deep level. He’s genuinely interested in Jabot’s new head chemist. Her appeal extends to brains, beauty, and being half Jack’s age, an age range he’s been attracted to on other occasions. Kerry’s admitting to liking Jack light the green light.

The hesitancy Kerry recently evidenced about entering a relationship with Jack makes sense on more than one level. One, she’s new in town and just getting her bearings. She’s just started a high-level job working at the company Jack once led and could lead again.

Jack’s ex-wife, Phyllis, now sits in the top Jabot spot and is the person who hired Kerry. Beyond all of that, viewers haven’t yet been told her relationship backstory and whatever that may entail.

As 2018 gets set to end, Jack has moved past hopes that he and Phyllis will reconcile. She’s with Nick (Joshua Morrow) for the moment and seems inclined to revert to Billy (as now played by Jason Thompson) if Phick doesn’t last.

Kerry has proceeded with caution until now, when she kisses Mr. Abbott. Like Jack, she too wants to take a leap of faith toward 2019. Hunter’s character appears to be promising. Less kooky then Phyllis and seemingly not unbalanced as Patty (Stacy Haiduk) and others have been.

Jack has earned a chance at happiness. Kerry, like anyone, deserves that too. So, Y&R fans will soon learn if this pairing works and then endures. CDL is a leading source for everything linked to The Young and the Restless. Check back regularly for Y&R spoilers and news!