The Young and the Restless Spoilers: Jack’s Betrayal of Kerry Looms – Phyllis Is the Ex to Watch Out for? 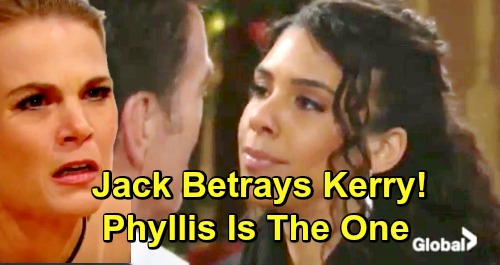 The Young and the Restless (Y&R) spoilers reveal that Kerry Johnson (Alice Hunter) should listen to her instincts. When Jack Abbott (Peter Bergman) started getting to know Kerry, she admitted that she hadn’t been all that lucky in love.

Kerry suggested that she’d just never found “the one,” but Jack may be hoping he can change that. He’s eager to jet Kerry off to Bora Bora and see where this leads.

Kerry kept her guard up at first and she still seems to have some reservations about Jack’s romantic history. After all, Jack has plenty of exes in Genoa City and he’s remained chummy with many of them. That’s just the kind of guy Jack is.

He’s not somebody who holds grudges against the women he cares about for long. Jack would rather let conflict die and start fresh with his former flames as friends.

Of course, that’s not the ideal situation for Kerry. It sounds like she’s had some bad breaks when it comes to relationships. Not finding “the one” could mean more than just not finding the right match.

Since Kerry’s so concerned about Jack’s track record with women, perhaps she’s been cheated on before. Kerry may worry that history’s going to repeat itself for her, but she’s trying to trust Jack on this.

The fact that Y&R’s playing up the history angle must mean something. It seems likely that Jack will indeed fall for one of his exes again. Phyllis Summers (Gina Tognoni) is the most logical option.

She’s been playing house with Nick Newman (Joshua Morrow), but does she really love him? Probably not. There’s just too much pain for a reunion with Billy Abbott (Jason Thompson) right now.

Plus, Nick clearly has lingering feelings for Sharon Newman (Sharon Case). He can’t be with Sharon, but that doesn’t mean he’s turned off his love for her. As Phyllis’ jealousy grows, it could tear her latest relationship apart. Once the J.T. Hellstrom (Thad Luckinbill) secret is revealed, that could be the final nail in “Phick’s” coffin.

Naturally, that opens the door to another romantic pairing for Phyllis. Since The Young and the Restless may be inching Billy and Victoria Newman (Amelia Heinle) back together, where does that leave Phyllis?

She could drift toward her ex as well. There’s still a lot of love between Jack and Phyllis. The show could be gearing up for a “Phack” reboot, so Kerry might be headed for heartbreak.

The Young and the Restless spoilers say big changes are brewing behind the scenes at Y&R. Those changes will undoubtedly include some departures, so it’s possible they’ll drop Kerry. She’s a pretty bland character so far. Jack’s betrayal could easily drive Kerry right out of town and set up an easy exit.

Whatever the case, there must be a good reason for Kerry’s doubts about Jack. Her fear about his former flames may be spot-on! We’ll give you updates as other Y&R news comes in. Stay tuned to the CBS soap and don’t forget to check CDL often for the latest Young and the Restless spoilers, updates and news.