The Young and the Restless Spoilers: Jack’s Dreams Shattered, Plans for Chancellor Empire Crumble – Not Phillip’s Son After All 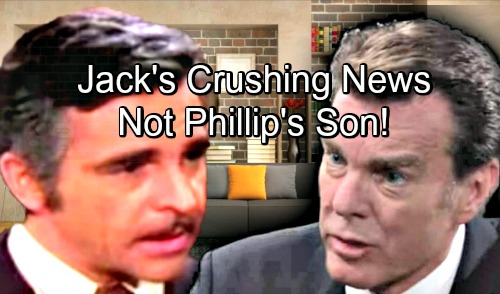 The Young and the Restless (Y&R) spoilers tease that Jack (Peter Bergman) and Kyle (Michael Mealor) will stay focused. Thanks to the photo clue and Dina’s (Marla Adams) confirmation, Jack believes Phillip Chancellor (Donnelly Rhodes) is his father. He just has to prove it and stake his claim at Chancellor Industries.

Jack finally has a reason to get up in the morning and feel hopeful about his future. This has been a real pick-me-up and Kyle can sense that. Of course, Kyle’s affected here as well. He’d also like to figure out the truth about who he really is, but digging too deep could cost him.

The Young and the Restless spoilers say Jack and Kyle will hit a couple roadblocks, so they’ll have to get creative. Kyle will decide to kick this plan in gear and exhume the body himself. If he gets busted, it could cause another delay in securing DNA proof.

Y&R viewers can expect Jill (Jess Walton) to show up on new Y&R episodes during the week of July 9-13. She’ll undoubtedly cause quite a fuss over Jack and Kyle’s actions. Jill will want them to back off Chancellor and leave Cane (Daniel Goddard) in peace. She’ll think this is all about money and power, but that’s not exactly true.

If Jack’s indeed a Chancellor, he’d certainly like his piece of the pie. However, Jack’s main goal right now is finding himself. He just wants to know who he is and where he came from. The thought of being tied to another respected Genoa City family fills him with hope.

Unfortunately, Jack’s probably headed for more heartbreak. This whole father solution seems a bit too convenient. Since when does Y&R make it this easy? Jack simply stumbled across a picture. He’s trusting Dina’s word, which doesn’t mean much due to her Alzheimer’s.

Once Jack finally gets the DNA sample he needs, he may be disappointed. Jack could end up back where he started in his bio dad search. His Chancellor empire dreams may crumble along with his new sense of belonging.

Luckily, The Young and the Restless has to resolve this sooner or later. Once this long and winding journey wraps up, Jack may learn he’s an Abbott after all. That would definitely please many Y&R fans! We’ll give you updates as other news comes in. Stay tuned to the CBS soap and don’t forget to check CDL often for the latest Young and the Restless spoilers, updates, and news.