BY Heather Hughes on July 2, 2018 | Comments: one comment
Related : Soap Opera, Spoiler, Television, The Young and the Restless 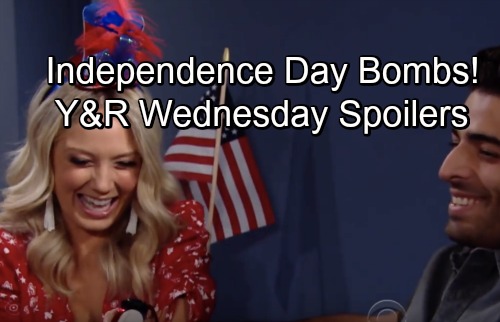 The Young and the Restless (Y&R) spoilers for Wednesday, July 4, tease that Independence Day will bring some shocking moments. First, Cane (Daniel Goddard) will take steps to prevent Jack’s (Peter Bergman) next attack. He’ll do everything in his power to protect Chancellor Industries and his spot at the top.

Cane doesn’t want Jack coming around and messing everything up at the company. It’s clear that he’s riled up and ready for anything. How far will Cane will go to thwart Jack’s plan? This is war, so Y&R fans should be prepared for some serious blows.

Nevertheless, Jack can’t back off now. The thought of being from another powerful Genoa City family brings him comfort. Jack’s desperate to prove Dina’s (Marla Adams) claims, so Cane had better watch out. The Young and the Restless spoilers state that some drastic moves are coming up later this week.

In the meantime, a big Fourth of July celebration will take place. There’ll be lots of food and fun, but Abby (Melissa Ordway) and Arturo (Jason Canela) will have something else in mind. It won’t be long until they sneak off for a passionate sex session. The Young and the Restless spoilers say they won’t be disappointed, but Nikki’s (Melody Thomas Scott) sure to cause more trouble soon.

Elsewhere, Tessa (Cait Fairbanks) will get a puzzling message. It sounds like she won’t know who it’s from or what it’s about. Perhaps Tessa will be summoned somewhere surprising. This could be some sort of setup to get Tessa and Mariah (Camryn Grimes) alone for fireworks. That sounds like something Kyle (Michael Mealor) or Summer (Hunter King) might do.

Then again, this mysterious message might have spookier consequences. Y&R likes to spring threats on characters when they least expect it. Tessa could find herself in a tight spot if she’s not careful, so stay tuned to watch the drama unfold.