The Young and the Restless Spoilers: Jack’s Future Brings Shockers – Risky Romance Ahead 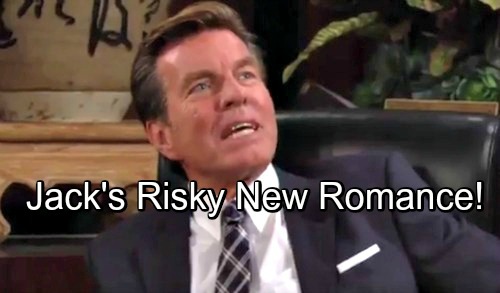 The Young and the Restless (Y&R) spoilers tease that Jack (Peter Bergman) will deal with even more family drama. Thanks to a buried secret that Dina (Marla Adams) and Kyle (Michael Mealor) expose, the Abbott clan will face another round of turmoil. It’ll all build to Ashley’s (Eileen Davidson) official exit and spark a new chapter for the rest of the Abbott brood.

Once the dust settles, Jack should be able to get his groove back. Ashley’s paternity plot caused him to believe he wasn’t a blood Abbott. Jack felt like he lost his identity, so he was desperate to find another one. That led to months of searching and dead ends. Jack got nowhere in his mission for answers because there was nothing to find. Jack is John’s (Jerry Douglas) son, so he can finally relax.

Of course, that means Jack can focus on other things like power and romance. He’ll undoubtedly make some waves at Jabot and shake up the corporate world, but what about his love life? Y&R fans know Jack still has feelings for Phyllis (Gina Tognoni). His ego probably took a hit since she hooked up with Nick (Joshua Morrow) after shutting him down, but he’ll get over it. The heart wants what it wants.

The Young and the Restless spoilers say Phyllis may indeed start looking for comfort. After the stunt Billy (Jason Thompson) pulled with Summer (Hunter King), Phyllis will wash her hands of him. There’s always a chance they’ll reunite down the road, but Phyllis certainly won’t be interested anytime soon. She hates Billy’s guts for daring to cross that line.

She obviously felt a spark with Nick or she wouldn’t have slept with him, but he may not be an option. Despite Sharon’s (Sharon Case) insistence that they’re over, Nick will stay focused on winning her back. He’ll be busy trying to shove Rey (Jordi Vilasuso) out of the picture over the next few weeks.

Jack doesn’t seem to have anyone else he’s interested in. We also know Phyllis still cares about him. It makes sense that these two will be drawn to each other. Will Jack get the reunion he’s dreaming of? Is that really a good idea? Jack could be setting himself up for more heartbreak, but that’s a risk he’ll probably be willing to take.

Regardless, The Young and the Restless spoilers say Jack will get his life together and concentrate on the future. He’ll hope for better days after the rough time he’s had. We’ll give you updates as other Y&R news comes in. Stick with the CBS soap and don’t forget to check CDL often for the latest Young and the Restless spoilers, updates, and news.