BY Heather Hughes on November 7, 2018 | Comments: one comment
Related : Soap Opera, Spoiler, Television, The Young and the Restless 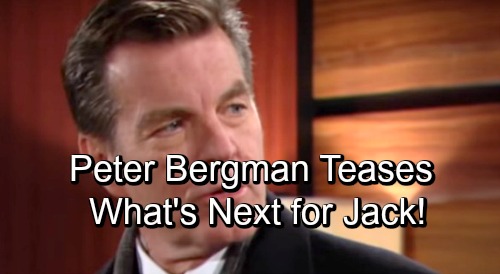 The Young and the Restless (Y&R) spoilers tease that Phyllis (Gina Tognoni) and Nick (Joshua Morrow) will keep enjoying each other’s company. They like having a friend to rely on as well as someone to sleep with. Nick and Phyllis blew up their relationships, so there’s no reason they can’t do whatever they want now.

Of course, Jack (Peter Bergman) will continue to disapprove. He let them both know he wasn’t on board, but his opinion doesn’t really matter. This is none of Jack’s business, but that won’t stop him from worrying. Deep down, Jack must wish Phyllis was in his bed instead of on Nick’s Dark Horse sofa. Although rebounds tend to spell trouble, Jack has been pining for quite a while.

Despite Phyllis’ tendency to betray the men she cares about, Jack can’t help but long for her. In an interview with CBS Soaps in Depth, Peter Bergman talked about Jack’s love life and his many struggles. Jack has forgiven Phyllis for cheating on him with Billy, but it wouldn’t matter if he hadn’t.

In Bergman’s opinion, there’s always going to be a “Phack” connection. He suggested that “forgiveness or no, you just don’t fall out of love with somebody, particularly if she is Phyllis.” Y&R could revisit this pairing at some point, especially now that Phyllis has revived her trademark red hair. Maybe Jack can have his “Red” back one day.

For now, Phyllis will be busy having sex with Nick. Where does that leave Jack? The Young and the Restless spoilers hint that love could be on the horizon, but who will Jack turn to? He doesn’t have a lot of options on canvas. Bergman would welcome a new hire to be paired up with, but he’s not exactly counting on it.

“I don’t think that would be a bad thing to do here, but I’m not holding my breath,” Bergman said. “As long as the women from Jack’s life keep going in and out of his life, I will have plenty to play.” It sounds like Jack will either have to wait on his turn with Phyllis or perhaps reunite with another ex.

Regardless, The Young and the Restless spoilers say Jack will remain a key player in Genoa City. Even if his next love story doesn’t pan out, Jack will show off his talents at Dark Horse and add some excitement to Y&R. We’ll give you updates as other news comes in. Stay tuned to the CBS soap and don’t forget to check CDL often for the latest Young and the Restless spoilers, updates, and news.