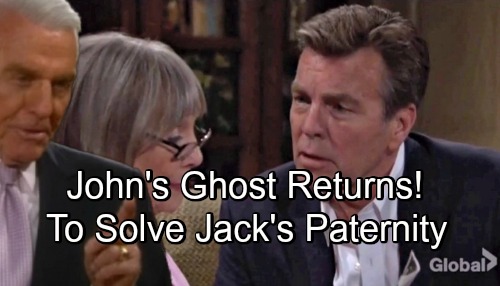 The Young and the Restless spoilers tease that a Genoa City source and an otherworldly entity will help Jack (Peter Bergman) solve his paternity mystery. Based on Dina’s (Marla Adams) return to her beloved book of memories, it’s become possible that her deceased husband, John (Jerry Douglas), will help to resolve a storyline question that’s remained open.

Viewers haven’t seen John appear to Jack in years. In fact, 2015 was the last time Y&R viewers saw the spirit of the Abbott clan.

It’s seemed odd that John hasn’t come back during Dina’s storyline, though that could be explained away by on-, or off-screen issues. Regarding fiction, the seeming reality of John actually existing would be confirmed if Dina saw him, as that would go beyond Jack being the only witness to the specter.

It could be assumed that John hasn’t appeared to anyone, including Jack during Dina’s Alzheimer’s crisis period, because he never existed in an otherworldly form. Jack simply conjured his presumed dad in his mind every time. However, John may have chosen to stay away since Dina came back for reasons that will be explained.

Regarding reality, it is possible that Douglas has not been able to recur as John because of health issues? There is no evidence to support this theory.

An earthly, science-based DNA test solution would necessitate John’s body being exhumed and a sample being taken. That sample could be compared to Jack’s genetic ooze, thereby providing a definitive answer. Kyle (Michael Mealor) can’t be told about this option, or he might feel compelled to handle the collection himself.

If the exhumation option doesn’t unfold, then a discussion between John and Dina could also provide needed answers. A great scene would have Dina talk with John while Jack is present. It would be very intriguing to not have Jack see his dad’s spirit during those moments, but simply be Dina’s witness to whatever her discussions unearth.

This type of soapy solution would enable the mystique of John’s specter to continue, as viewers would be free to decide if John was real, or if Dina was simply using her memories to deliver the truth to Jackie. That experience could then be coupled with Jack’s past encounters as subjective proof that John’s spirit does visit his loved ones.

So, John visits Dina. They talk about their shared past, including the troubled times that led Dina to abandon her children, one of which was Jack.

Dina mentioned a dalliance with a country club man to Abby (Melissa Ordway) many months ago. Madame Mergeron, who was Mrs. Abbott in the past, hasn’t been able to recall that person’s name, but believes he’s Jack’s biological father. Since Jack and Traci’s (Beth Maitland) DNA doesn’t match, that either means John is Traci’s biological father and not Jack’s, or the reverse is true.

As savvy readers of this comprehensive soap site know, Maitland announced via social media that Traci is about to return to town. That point, along with Jack’s renewed interest in his paternity search, means that some type of climax is coming. How creatively great if the hoped-for end to this mystery happens via Dina’s vision of her once and apparently still beloved John.