The Young and the Restless Spoilers: John Abbott Was Infertile, Fathered NO Children – Jack’s An Abbott Anyhow

BY Sean O'Brien on May 16, 2018 | Comments: one comment
Related : Soap Opera, Spoiler, Television, The Young and the Restless 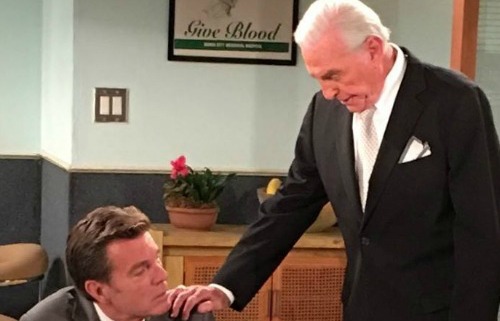 The Young and the Restless spoilers tease that John Abbott (Jerry Douglas) was infertile. However, soapy explanations will still eventually prove that Jack (Peter Bergman) is an Abbott.

The headline to this feature will prove true if John’s condition developed after Jack was born… or even before! That would make sense, keep Bergman’s legacy character in his proper genetic place, and would also help to explain why all of Dina’s (Marla Adams) known children born after Jack, including Ashley (Eileen Davidson), Traci (Beth Maitland), and Billy (Jason Thompson), aren’t biologically John’s.

Alternatively, little has ever been said about John’s family history. But Dina could have easily eyed up John’s assumed brother before bedding that man (various times) in the 1950’s. Thus Jack would still be an Abbott, although through his presumed uncle, but an Abbott nonetheless. However, this angle, if pursued, would seem less appealing than having Jack remain John’s son – and John becoming infertile after Jack.

Dina previously stated that John wasn’t able to give her what she needed. That’s code for horizontal meanderings. Though the more that’s learned about Dina, she apparently was open to countless positions. Possibly Y&R will reveal that Adams’ character participated in Masters’ and Johnson’s (in)famous testing procedures oh so many years ago.

All who don’t know about that real life scientific research team’s tests should conduct an Internet search. Upon doing so they’ll learn that yes, John’s proposed issue, especially if coupled with impotency, would plausibly have led to Dina obtaining carnal sustenance elsewhere.

Dohn would have been the public nickname given to Dina and John had mashed up nicknames existed approximately six-plus decades ago when they first became a couple in Genoa City. Dohn presumably kept up appearances, while living unusually behind the doors of the Abbott family mansion. As tenured Y&R fans know, the show didn’t debut until 1973, so this is all revisited conjecture.

News of John’s assumed condition would surely prove embarrassing to his legacy and put three of his children in awkward public and private positions. But at least answers would be given to the audience about the reason why Dina cavorted with so many men. Yet, loyal spouses would still recognize Dina’s inability to control herself, or make sacrifices.

The three syllables that comprise this name, Jack Abbott, are as much a part of Y&R’s modern history as are the four syllables in the moniker Victor Newman. Let’s suggest, with partiality, that John and Dina created Jack early in their marriage, then wanderlust took hold and Dina roamed GC’s streets looking for a different kind of love.