The Young and the Restless Spoilers: Jordan’s Return Leads To Hilary Baby Drama – Devon or Jordan the Father? 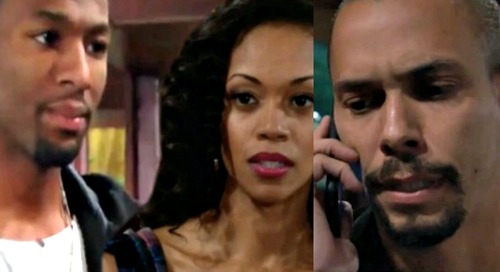 The Young and the Restless spoilers tease that Jordan’s (Darnell Kirkwood) return to Genoa City purposely coincides with Hilary’s (Mishael Morgan) desire to have a baby. While she’s currently undergoing artificial insemination treatments, her eventual conception could be tagged to Mr. Kirkwood, character.

Jordan needed money after being fired from Brash and Sassy, due to Hilary’s expose that revealed his past history as a con artist, along with his partner in crime, Chelsea (Melissa Claire Egan). So, it would make sense to reveal in a flashback, or referenced event, that Jordan went to a donation center and made a deposit in exchange for cash. Imagine Hilary’s surprise when a protocol break reveals him as the father of her baby!

However, because soaps need to inject dilemmas into storylines, Devon (Bryton James) will also believe that the child is his. Hilary won’t dissuade her first choice and only soul mate in that regard, as both parties will want that to be the case. Whether Jordan is told, or comes to learn this truth will be dependent upon Y&R’s longterm plans, if any, for Kirkwood.

Speaking of the actor who embodied Jordan, it didn’t feel like his arc had ended when he quickly upped and left town in the recent past. It was reasonable to believe that he would have wanted to do so. But characters who’ve been on for awhile, even for a shorter stint as Kirkwood’s had been, generally are allowed a fitting write-out. Jordan didn’t get that and will be back to at least tie up loose ends.

Along with the Hilary angle, Chelsea’s pending exit from GC will comprise part of Jordan’s return screen time. Y&R fans just saw Chelsea stash a hoard of bundled Ben Franklin’s in Adam’s (Justin Hartley) supposed final resting place. That stunner, along with provided knowledge of Chelsea and Jordan’s past creative, collaborations are enough to tease the money to those combined efforts. Of course that could mean Jordan holds rights to some of that loot.

Was Chelsea telling the whole truth when she denied having been involved with Jordan in the past? How could anyone believe what she has to say at this point based upon the surprising revelation that she was posing under an assumed name and had a secret bank account?

Separate from money issues, Jordan will be presented with an only in soapland situation. Yes, his seeming anonymous deposit of genetic material could have made Hilary pregnant, or at least that will be a working theory.