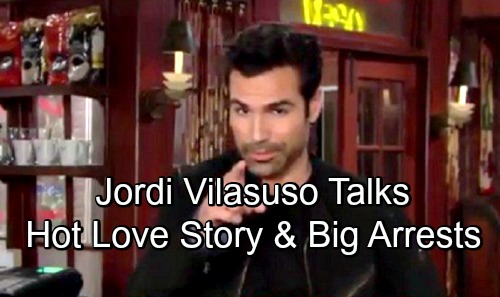 The Young and the Restless (Y&R) spoilers tease that Rey (Jordi Vilasuso) will definitely shake things up in Genoa City. Many Y&R fans are excited to see all the trouble Rey stirs up, so his portrayer offered a preview of all the action. In an interview with Michael Fairman, Vilasuso dished on Rey’s investigation as well as his upcoming love story. Rey is sure to be a busy guy in the coming months.

For starters, there’s the case of J.T.’s (Thad Luckinbill) disappearance. Rey’s looking into it, but his motives are a bit mysterious. Vilasuso promised viewers they wouldn’t have to too long for answers. When will we find out more? “Sooner rather than later,” Vilasuso said. “We have very good pacing for his entry on to the canvas.”

Vilasuso also weighed in on Rey’s dedication to his goal in Genoa City. His character’s quite committed to finding the truth. “I think Rey knows what he wants,” Vilasuso said. “He is very serious about his work, and he has a lot of ways of working through different situations.”

The Young and the Restless spoilers say Rey will have a few tricks up his sleeve. He’ll certainly charm Sharon (Sharon Case) as their friendship kicks off this week. Rey’s the kind of guy who can flash a bright smile and fool just about anyone. No matter who Rey’s talking to, he’ll be able to connect on some level.

Vilasuso talked about how great Rey is at reading people. He suggested that being adaptable is Rey’s strong suit. “From Victor Newman, to Sharon, to Michael… he can talk to whoever is thought of as having the most status,” Vilasuso said. “He has that knack.”

It’s interesting that Vilasuso mentioned Michael, Genoa City’s favorite lawyer. That could mean Rey’s already exposed the cover-up crew in some upcoming scenes. Michael would naturally be their first call! Regardless, the girls’ night fiasco will be brought out in the open eventually. Phyllis (Gina Tognoni), Victoria (Amelia Heinle), Nikki (Melody Thomas Scott) and Sharon will all be on the hot seat.

What about Rey’s love life? When the chaos of all this dies down, who will he sizzle with? Vilasuso’s down for anything. He exclaimed, “All of the women!” Vilasuso mentioned having scenes with Sharon Case, Tracey E. Bregman (Lauren) and Melissa Ordway (Abby) so far. He noted that “everybody has been extremely lovely to work with.”

However, The Young and the Restless buzz hints that Sharon and Rey could come together down the road. She’ll have to forgive him for the J.T. investigation, but that’s not an impossible hurdle. After all, the cover-up crew did break the law! Rey’s just trying to seek justice and expose the real story. Since J.T. was such a monster, the ladies should be able to get off the hook at some point.

Are you excited about what’s next for Rey? Would you like to see a Rey and Sharon pairing or would you rather see him with someone else? We’ll give you updates as other Y&R news comes in. Stay tuned to the CBS soap and don’t forget to check CDL often for the latest Young and the Restless spoilers, updates, and news.