The Young and the Restless Spoilers: Kyle and Jack’s Fierce Power Struggle – Y&R’s New Version of Adam and Victor 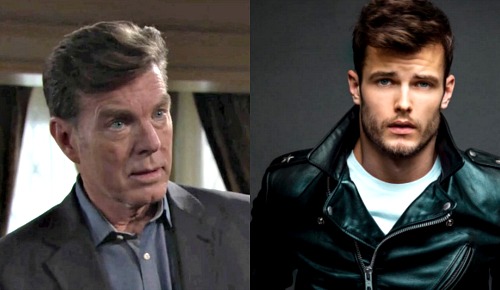 The Young and the Restless (Y&R) spoilers tease that Michael Mealor will debut as a Kyle Abbott recast later this month. He’ll undoubtedly get caught in some major family drama right away. Y&R viewers know Dina (Marla Adams) isn’t doing very well. Her Alzheimer’s symptoms are getting worse and that means the Abbotts must prepare themselves for the inevitable.

Abby (Melissa Ordway) had already had a chance to get to know her grandmother, which has been great for both of them. They’ve certainly enjoyed spending time together. Dina recently got lost and ended up in London, but that wasn’t Abby’s fault. Besides, it was just a hiccup on an otherwise fun trip.

Nevertheless, Dina’s mental state is declining and it’s time to settle down at home. Perhaps that’ll give Kyle an opportunity to bond with her, too. Dina would definitely appreciate that. Naturally, Kyle will also stir up some trouble once he’s back in GC. He could turn out to be a bit of a bad boy this time around.

The Young and the Restless offered a hint of what’s to come. By having Kyle vote against Jack (Peter Bergman) a board meeting, they set him up as a rebel who’s not afraid to take a stand. Kyle should give us an edgy Abbott with some attitude.

Recasts are great for character resets. We’re getting a new version anyway, so Y&R can tweak the character to what they need. Of course, what they need is someone with a personality like Adam (Justin Hartley).

Victor (Eric Braeden) always had a love-hate relationship with his son. He cared about him, but only when Adam was a loyal Newman soldier. Victor’s conditional love often led to tension. Part of that stemmed from Adam’s willingness to stand up for himself. He wasn’t afraid to scheme against Victor if he had to.

That got Adam in a jam on more than one occasion, but Y&R fans got some fantastic drama out of it. Although no one could replace Adam, The Young and the Restless might try to fill the void with Kyle. It wouldn’t be quite the same, but at least we could see that same power struggle. This time Jack and Kyle may be the dueling father-son duo.

Since Jack and Ashley (Eileen Davidson) will be distracted by Dina, Kyle might even use this as his shot at taking control of Jabot. You never know what tricks Kyle might have up his sleeve! We’ll give you updates as other Y&R news comes in. Stay tuned to the CBS soap and don’t forget to check CDL often for the latest Young and the Restless spoilers, updates and news.