The Young and the Restless Spoilers: Kyle and Phyllis Hook Up – Huge Twist Shocks Summer and Billy? 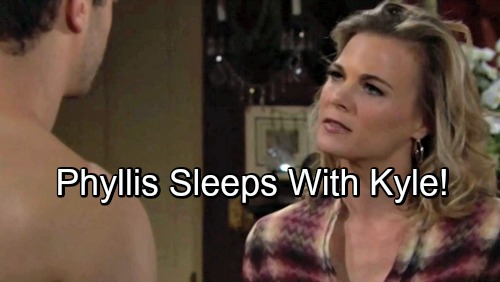 The Young and the Restless (Y&R) spoilers tease that Phyllis (Gina Tognoni), Billy (Jason Thompson), Kyle (Michael Mealor) and Summer (Hunter King) will remain caught in some messes. These four are all connected in surprising ways. Secrets are swirling and desires are burning, so it’s only a matter of time until some twists change the game.

Summer’s plan to seduce Billy hasn’t worked out so far. She even admits defeat in Thursday’s episode, but a burst of confidence should follow a little later. Summer could see a window of opportunity in the near future. It could involve another round of conflict between Billy and Phyllis.

Kyle’s clearly got some lingering feelings for Summer, but she also drives him up the wall sometimes. Summer’s not the easiest person to get along with! Kyle certainly understands Phyllis’ frustration with her daughter, so that’s established a bond between them.

Plus, Phyllis is impressed with the way Kyle (Michael Mealor) dotes on Dina (Marla Adams). Kyle also helped Phyllis after she lost track of Dina briefly. Y&R is finding reasons to push Phyllis and Kyle together, which is awfully intriguing. Perhaps Billy and Summer aren’t the only ones poised for a potential hookup!

Phyllis obviously has issues with loyalty. Nobody would be surprised if she ended up in bed with Kyle. It’s easy to imagine Phyllis assuming the worst about Summer and Billy. She may get with Kyle as a good dose of retaliation. It’d hurt Billy and even Summer since she must have some love left for Kyle deep down. Phyllis would undoubtedly enjoy having a shiny new boy toy to play with, too.

This would definitely complicate Kyle’s takedown mission. He’s got a plan to knock Billy off the Jabot throne, but having sex with Phyllis could change the game. Billy was never going to take this lying down anyway, but all bets will be off if Kyle sleeps with Phyllis. It could spark the family war of the century!

Do you think Kyle and Phyllis should hook up? Is that the twist this storyline needs? We’ll give you updates as other Y&R news comes in. Stay tuned to the CBS soap and don’t forget to check CDL often for the latest Young and the Restless spoilers, updates and news.