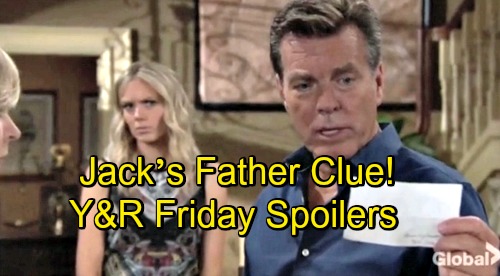 The Young and the Restless (Y&R) spoilers for Friday, September 7, tease that Billy (Jason Thompson) will take what might be his biggest gamble yet. In Thursday’s episode, Billy signs up for a major poker tournament and lies to Phyllis (Gina Tognoni) about it. He ultimately decides honesty is the best policy, so he comes clean and asks her to support him.

Billy’s probably moving forward with his plan whether Phyllis likes it or not. As a result, she may decide to get on board this Friday. Phyllis might sense that this is important to Billy. She doesn’t want to let him go fall back into old habits, but maybe they can make a deal.

Phyllis might suggest that if Billy loses, he has to stop taking such huge risks. She won’t want him gambling away his entire fortune.

Billy might reach an agreement with Phyllis and gain her approval. Regardless, it appears Billy’s headed to Las Vegas for this high-stakes game. The Young and the Restless spoilers point to an initial victory for Billy. He’ll likely have some success as the tournament kicks off.

However, there’s no guarantee Billy’s lucky streak will last. That’s especially true since Kyle’s (Michael Mealor) plotting Billy’s destruction. If Billy keeps winning, Kyle may have to take drastic action. He could surely set up some losses with a little help from Sinead (Lira Kellerman).

Other Y&R spoilers say Jack (Peter Bergman) will get a significant clue. It seems an old photo album will lead Jack down an intriguing path. The search for his father will suddenly be back on! Jack will fill Ashley (Eileen Davidson) on his suspicions about a strange picture. He’ll contend that one of the men in the photo could be his dad, so he might as well start digging and find out.

Over with Cane (Daniel Goddard), he’ll have a tough visit with Lily (Christel Khalil). It’s only been a couple days, but Lily’s already missing her family. She hates the thought of being behind bars for a whole year, but Cane will give her a pep talk. He’ll do whatever he can to console Lily and keep her strong.