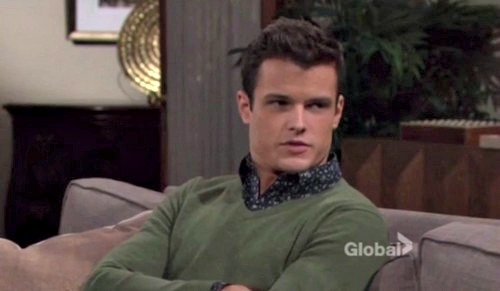 The Young and the Restless spoilers tease that Kyle (Michael Mealor) will learn his grandmother’s paternity secret before his father does. Confirming that Jack (Peter Bergman) isn’t an Abbott will also mean that Kyle isn’t biologically tied to that family either.

This recast character’s return to Genoa City was revealed as part of a plot to take down Jabot. Kyle nearly succeeded in pushing the perceived family’s company public. But the Board of Director’s vote was skirted when Jack returned to the office after being released from prison.

As Y&R viewers saw, Kyle retrieved the memory stick that Ashley (Eileen Davidson) threw into the fireplace. How that piece of technology avoided disintegration was mysterious and let it be said, a bit soapy. As a result, Kyle gained access to the interview Abby (Melissa Ordway) conducted with their grandmother where she reveals that John (Jerry Douglas) isn’t Jack’s real dad.

That mega-shocker is the last bit of news that Ashley, Abby and eventually Jack would want Kyle to know. Jack’s knockoff will seek to exploit his find shortly after obtaining this knowledge.

Jack was the person who changed Jabot’s bylaws years ago. He adjusted legal language that made it impossible for a non-blood Abbott to serve as Chief Executive Officer. More recently that meant Ashley couldn’t assume the title. Now it means Jack and Kyle are also ruled out if John proves not to be Jack’s biological father. Next up would be Billy (Jason Thompson) and Traci (Beth Maitland), unless Dina has another reveal up her sleeve about her other daughter.

If Kyle advises Victor what he learned fans know that both of Jack’s opponents will seek to maximize this weapon. Whether that results in Newman Enterprises somehow taking over Jabot, as was originally intended, or not is just one worry.

Unless Jack learns the truth, or is told it by Ashley, or Abby, he’ll remain open for a major blindside assault. For whatever his reasons, Kyle has sustained a grudge against his father that portends toward doom.

The Abbott family has been reeling for awhile due to Dina’s Alzheimer’s diagnosis. Sibling strife fractured the relationship between Jack and Ashley, even though they’ve recently begun repairing their link.

Might it be possible that Jack’s bleak future could actually be rescued through this storm? It does seem unlikely. But the Abbott clan, with whatever that means, could pull together as a result of Kyle’s misguided anti-family games.