The Young and the Restless Spoilers: Lane In Danger of Dissolving – Cane Abandons Inmate Wife?

BY Sean O'Brien on October 19, 2018 | Comments: one comment
Related : Soap Opera, Spoiler, Television, The Young and the Restless 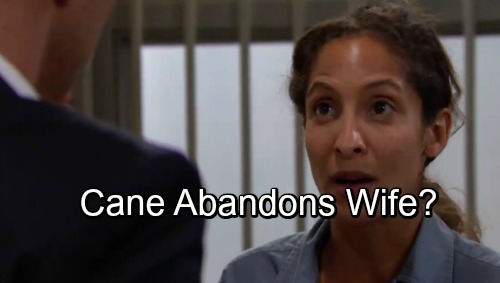 The Young and the Restless spoilers tease that Cane (Daniel Goddard) may do the unthinkable. While Juliet (Laur Allen) is living in some part of the otherworld, Sam’s father may abandon his inmate wife for another woman.

Lily (Christel Khalil) recently told Cane that she’s sick of him and the twins putting on a happy face when they visit her in Walworth State Prison. She’s come to terms with being incarcerated for the accidental death of Hilary (Mishael Morgan) and is simply trying to make it through the next ten months.

Cane will skip a planned visit to Lily, which will spurn Nate (Brooks Darnell) to think that his cousin has been slighted. Goddard’s character will have a reasonable explanation regarding his decision, but viewers will feel the implication.

The Jane storyline deeply offended longtime Lane fans. This same contingent was then saddened to learn that Khalil recently opted to move to recurring status, thereby jeopardizing this longtime couple in a far starker manner.

The actor countered speculation that she was part of a perceived cast cut by praising Sony, along with all connected to daytime’s twenty-nine-year-running number one soap, and noted that an offer for her to remain full-time had been received. Khalil publicly stated that she’s looking forward to Lily’s continuing adventures, but wanted to spend more time with her real life family.

The sixteen-year cast member is well-liked by a wide swath of the audience and has also been strongly supported in her collaborative efforts with Goddard, who formed Lane along with Khalil many years ago. It was during the Lane years (2012) that Khalil earned a Daytime Emmy Award for her great work.

In one of Khalil and Goddard’s most compelling arcs in recent memory, Cane and Lily nearly didn’t survive Juliet’s pregnancy. Y&R opted to write out Allen’s character, but leave Jane’s son, Sam, alive.

Lily subsequently came to care for Cane’s third-born child. But interestingly, follow-up scripts didn’t focus much on Sam’s place within the Ashby family and he’s rarely been seen on-screen.

While Khalil’s drop to recurring status means that Lily won’t appear as often in Genoa City, sporadic mini-storylines will play out that do involve her. Since Mrs. Ashby is limited to the jail house, she’ll either need to encounter drama behind bars, or work off of outside occurrences involving her loved ones.

Y&R could believably revisit Cane’s infidelity by having him drift away from Lily and then seek comfort in another woman’s arms. Juliet was never Cane’s love, but it is reasonable to think that another woman could slowly supplant Lily in his life while she’s locked up.