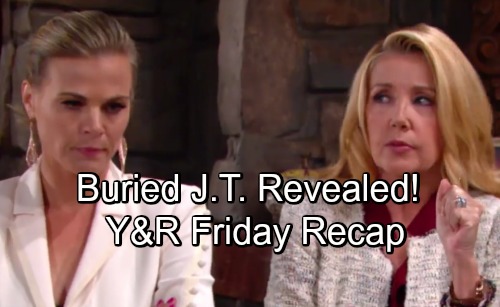 The Young and the Restless (Y&R) spoilers update and recap for Friday, October 19, tease that Dina (Marla Adams) will have a rough day. She’ll struggle to remember much of anything at the Abbott mansion, so Ashley (Eileen Davidson) will grow frustrated. After Ash presents a box of mementos, it’ll jog Dina’s memory a bit.

However, Dina will focus on only the good times. That’ll infuriate Ashley, who’s still struggling with pain over Dina’s mistakes. After she brings up some awful memories, Dina will insist that they had a happy home life once. She’ll offer to prove it, but Ashley will just snatch the box and stomp off.

When Kyle (Michael Mealor) appears, he’ll find Dina rummaging around the house. Kyle will wonder what she’s looking for, so Dina will explain. She’ll argue that it’s evidence she was a good mom. Dina will eventually recall a few clues that point Kyle to the Jabot safe. He’ll suggest taking a trip over there right away.

Once they’re at the office, Dina will surprise Kyle by knowing the safe’s location. She’ll even remember that her birthday’s the combination. Kyle will enter the numbers and crack it open, so Dina will be overjoyed. Y&R viewers can expect a bombshell to be contained inside.

At Crimson Lights, Nick (Joshua Morrow) will arrive and mention Christian (Jude and Ozzy McGuigen). He’ll tell Sharon that the kid misses her along with Faith (Alyvia Alyn Lind) and Mariah (Camryn Grimes). Sharon will assure Nick that she still wants a spot in Christian’s life. She just doesn’t have room for Nick anymore.

Nick will protest, but Rey (Jordi Vilasuso) will interrupt. Sharon will taunt her ex by pushing Rey to talk about his brand-new bed. After Nick walks away in disgust, Sharon will head upstairs to check out the mattress. Later, she’ll give Rey some sheets as a gift and take a call from Mariah. That’ll lead to a conversation about losing Cassie (Camryn Grimes) and the struggles that came with it.

Rey will point out that his wife wasn’t on the same page about children. He’d like to have some, but she wasn’t interested. Over with Abby (Melissa Ordway), she’ll vent to Arturo (Jason Canela) about her messed up family. Arturo will want to help, but Abby won’t think there’s any hope for the Abbott clan.

Afterward, Nick will track Abby down and pump her for info. He’ll want to know about the conflict between Rey and Arturo. Nick will be looking for any little way to trip Rey up. He’ll suggest that he doesn’t trust Rey’s motives for pursuing Sharon, so Abby will promise to find out what she can.

Other Young and the Restless spoilers say Victoria (Amelia Heinle) will bump into Ashley. They’ll commiserate over having the right qualifications, but still fighting to measure up to their brothers. Later, Victoria will find out Sharon, Nikki (Melody Thomas Scott) and Phyllis (Gina Tognoni) all received a threatening email. Sharon will march in Victoria’s office and push her to look at the message.

Victoria will get on her laptop and pull up the same email. The blackmailer will insist that they’re not through. If the cover-up crew doesn’t send a $250,000 payment, the police will learn what’s buried in the park. This mystery man or woman will offer a pic of the sculpture as proof, so Victoria and Sharon will certainly be rattled.