The Young and the Restless Spoilers: Phyllis and Summer Team Up for Revenge – Billy Faces Mother-Daughter Duo’s Brutal Plot 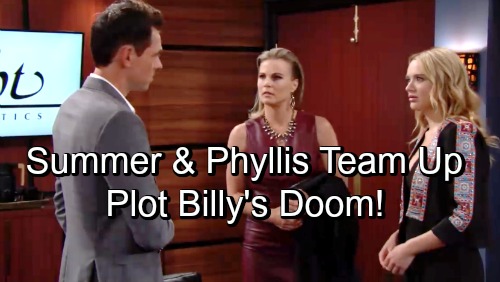 The Young and the Restless (Y&R) spoilers tease that Phyllis (Gina Tognoni) will try to pick up the pieces of her shattered heart. Billy (Jason Thompson) leaves her furious and devastated in Thursday’s Y&R episode. He makes it clear that he wanted to hurt her by sleeping with Summer (Hunter King) and screwing her over. The fact that Billy stooped so low is almost more than Phyllis can bear.

However, something good will actually come out of this nightmare. Summer was used, but the experience will leave her with a valuable lesson. She’s finally learning that actions have consequences and it’s not fun to be on the receiving end of the pain. Summer spent months chasing after Billy and trying to make him her latest conquest. All she got out of it was a hookup and overwhelming sorrow.

Summer will grow up slightly thanks to the emotional distress. She certainly won’t turn into a saint, but anything’s better than being her usual horrible self. The Young and the Restless spoilers say Phyllis and Summer’s bond will grow stronger. They’ll connect over their regrets and heartache, so that’s something worthwhile, too. Y&R will give this mother-daughter duo a chance reboot their relationship.

Of course, there’d be a great way to solidify that bond. Perhaps Phyllis and Summer could team up for revenge! They’d both have a motive to hurt Billy the way he hurt them. It may seem like a never-ending payback merry-go-round, but Young and the Restless fans would get some good drama out of it.

Billy’s vengeful move was pretty uncalled for. Phyllis and Billy were on a break at the time of her so-called betrayal. He’d moved out of the apartment, so she was free to have anyone she wanted over.

Was it a bad idea to sleep with Nick (Joshua Morrow), an ex who couldn’t be entirely sure of his status as Sharon’s (Sharon Case) fiancé? Absolutely, but the point is Phyllis was free to do it. It doesn’t matter if it’d been two days or two years. Phyllis was single that night and that’s that.

Although Summer might mature a bit due to this mess, that doesn’t mean she’ll let people walk all over her. Phyllis may not sit back and take this either. Y&R has the perfect opportunity to let Summer and Phyllis join forces. They could put their heads together and come up with a way to make Billy suffer.

Does Billy deserve to go down for what he’s done? Should Phyllis and Summer make him sorry he ever crossed them? We’ll give you updates as other Y&R news comes in. Stay tuned to the CBS soap and don’t forget to check CDL often for the latest Young and the Restless spoilers, updates and news.