The Young and the Restless Spoilers: Victor and Nick’s Nasty Custody Battle – Father and Son Fight to Control Christian’s Future

BY Marcy Cohen on May 29, 2018 | Comments: one comment
Related : Soap Opera, Spoiler, Television, The Young and the Restless 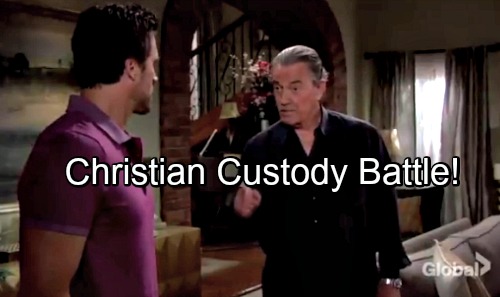 The Young and the Restless (Y&R) spoilers tease that Victor (Eric Braeden) and Nick (Joshua Morrow) could be gearing up for another fierce battle. This time it could involve custody of Christian (Jude and Ozzy McGuigen)! In Tuesday’s episode, Victor takes a jab at Nick by bringing up Christian’s paternity. He makes it clear that Nick shouldn’t get a say in Christian’s future at Newman Enterprises.

Victor has no intention of handing over the company to Victoria (Amelia Heinle) or Abby (Melissa Ordway). If Nick won’t take the lead, it’ll be up to Noah (Robert Adamson) or Christian to handle things one day. It’s too late to pry Noah out of Victor’s grasp, but Nick intends to take precautions with Christian. He hopes to take a stand and keep Victor’s grubby paws off the boy.

Something tells us that plan won’t pan out. Victor’s the kind of guy who gets what he wants, so he won’t let Nick derail his dreams. He would have no problem suing for custody of his grandson. Victor might suggest that he tried to be nice about this and offer Nick a great opportunity. Since Nick’s putting up a fight, Victor could argue that he’ll have to take a harsher approach.

Victor may spell out his conditions and deliver some fierce threats. Perhaps he’ll contend that Nick’s going to take the COO position and lead Newman into the future. He could also insist that Christian will carry on the family legacy down the road.

If Nick objects to any of that, Victor may declare that he has no choice but to seek custody of Christian. He could try to blackmail Nick into following orders. Of course, Nick’s almost as stubborn as his ruthless father. He has a tendency to think he can go up against Victor and come out on top, but that doesn’t usually work out for him.

Y&R fans know Victor has ways of getting around the legal system. There’s surely a judge he could bribe or possibly threaten with skeletons in his or her closet. The Young and the Restless spoilers say Nick and Victor’s war will bring some summer shockers. Will Nick call Victor’s bluff and lose big time? Will Victor follow through on his promises and take Nick to court over Christian?

It sounds like some exciting scenes are ahead in Genoa City. The Young and the Restless viewers won’t want to miss all the action. We’ll give you updates as other Y&R news comes in. Stay tuned to the CBS soap and don’t forget to check CDL often for the latest Young and the Restless spoilers, updates, and news.