The Young and the Restless Spoilers: Mariah Kidnapped, Lands in Deadly Danger with Tessa – Rey Saves the Day?

BY Kinsley Goldman on August 15, 2018 | Comments: one comment
Related : Soap Opera, Spoiler, Television, The Young and the Restless 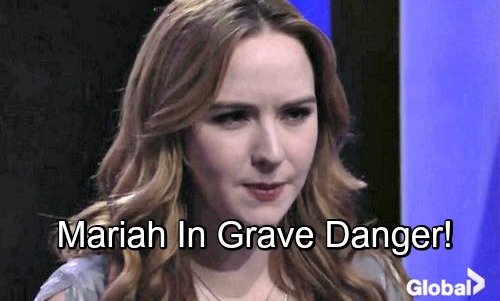 The Young and the Restless (Y&R) spoilers tease that Mariah (Camryn Grimes) will battle growing anxiety. After Tessa (Cait Fairbanks) lashed out at someone during their phone call, they got disconnected. Mariah left a voicemail for Tessa to call her back and let her know everything was OK. Since Tessa didn’t, that’s a huge indicator that things are far from fine!

Next week, Mariah will become increasingly concerned about the danger. She’ll hold out hope that Tessa will return safe and sound, but her worries will intensify with each passing day. Mariah only knows Tessa was in Canada, so that’s not a lot to go on. She could try reaching out to the cops, but she wouldn’t have much info to pass along.

Mariah may find some way to take action, but what if the baddies strike first? Perhaps Mariah herself could be in peril. Before Tessa decided to make this a round trip, she was convinced that she had to leave Mariah for good. Tessa feared that she’d put Mariah’s life on the line if she didn’t.

Let’s consider this clue in the dialogue. In that emotional car scene, Tessa explained her terrible thoughts. “There are people out there who still want to hurt my sister and I won’t put you in their path,” Tessa said. “I would die if anything happens to you.” Uh-oh. Was that a hint that Mariah could get caught in the Crystal (Morgan Obenreder) chaos?

Tessa later decided she didn’t have to choose between Mariah and Crystal anymore. It seemed like she suddenly forgot this was a deadly situation. It’s possible the sex ring scoundrels will come after Mariah soon, especially if they need info from Tessa (Cait Fairbanks) or want to make her suffer.

Since Tessa has Mariah’s journal, it could tip off the bad guys to how much Mariah knows. She could be viewed as a threat to their plans. The journal could also make it easy to pinpoint Mariah as a target. Tessa would do just about anything to protect her, so kidnapping Mariah could make sense from a leverage standpoint.

This could line up with some other Young and the Restless spoilers about Rey (Jordi Vilasuso). He’ll be involved in more than just the J.T. (Thad Luckinbill) storyline. Word has it he’ll get mixed up in the Crystal drama at some point.

We also know Y&R’s bringing Rey in as a potential love interest for Sharon (Sharon Case). Could he help her find her abducted daughter? Saving Mariah would be a great way to kick off a Rey and Sharon romance.