The Young and the Restless Spoilers: Mariah Fears For Tessa’s Life – Goes On Dangerous Rescue Mission To Save Her

BY hellodrdavis on August 13, 2018 | Comments: one comment
Related : Soap Opera, Spoiler, Television, The Young and the Restless 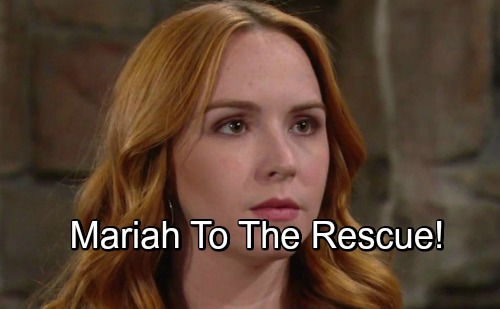 The Young and the Restless spoilers tease that Mariah (Camryn Grimes) will become increasingly worried about Tessa (Cait Fairbanks). Mariah hasn’t heard much from Tessa since Tessa left town to help her sister. But Mariah did receive a brief phone call from Tessa that made her fear for Tessa’s safety and even her life.

During the call, Tessa was upbeat, but the call was cut off in a disturbing manner. It certainly sounded like Tessa was fending off some unwanted attention from someone, and then the call dropped off. Mariah frantically tried to call Tessa back, but she didn’t answer.

This naturally worried Mariah, and chances are that her concern will grow as time goes on. Mariah would really like to hear back from Tessa that everything is ok, but it sounds like she’ll have no more communication from Tessa.

Of course, Tessa’s on a dangerous mission. She’s in Canada trying to help her sister, who was involved in a treacherous prostitution ring and has been on the run for several months now. Tessa either can’t or won’t provide details on what’s going on to Mariah, and that’s driving Mariah crazy. Not knowing what’s going on is killing Mariah, and after the dropped phone call, her fears may start to get the best of her.

Mariah might decide that it’s time to take action, and she may take steps to track Tessa down in Canada. Mariah’s not exactly a super sleuth, but she may know someone who could help her trace Tessa’s whereabouts. Tessa hasn’t left many clues as to where exactly she is, though, so it could be tough.

Or Mariah could just wait it out until Tessa’s next call. But knowing Mariah, she’ll probably want to take matters into her own hands and track Tessa down herself. Mariah’s still reeling from losing Hilary (Mishael Morgan) and probably doesn’t want to lose anyone else important to her, so she may decide to go for it.

Do you think Mariah will hit the road to find Tessa? Stick with the CBS soap and don’t forget to check CDL often for the latest Young and the Restless spoilers, updates, and news.