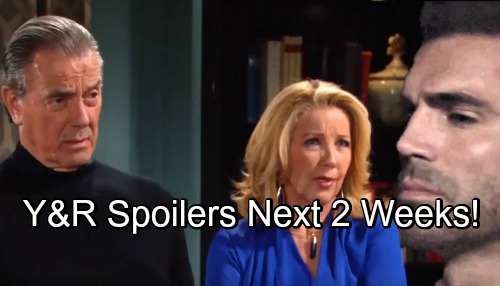 The Young and the Restless (Y&R) spoilers for the next two weeks tease that Genoa City will face some surprises. The week of August 13-17 will leave Lily (Christel Khalil) in shock. Cane (Daniel Goddard) will push his wife to leave her legal woes behind. He’ll believe the only way to keep their family together is to flee.

Charlie (Noah Alexander Gerry) will secretly work on another plan, but Cane and Lily will focus on a possible escape to Australia. Although Cane will bring up a lot of good points, Lily probably won’t go for the idea. She’ll worry about what’s ahead, so it sounds like she’ll be sticking around to face her punishment.

Later, Lily will try to repair the damage with Devon (Bryton James). Will she have any luck this time? Devon is still hurt and furious over the loss of his family. Unless Lily gets some miracle, it’s doubtful Devon will soften toward her anytime soon.

Other Young and the Restless spoilers say Michael (Christian LeBlanc) will rush to Lauren’s (Tracey E. Bregman) defense. This will likely tie in with all the Jabot and Fenmore’s drama. Lauren may insist on dissolving this partnership and get some flak for it. Gloria (Judith Chapman) will stir up some trouble this week, so this could be a great place for her to get involved.

Meanwhile, Summer (Hunter King) will figure out who Phyllis (Gina Tognoni) went to bed with. She’ll disclose what she knows later, so Phyllis will be in panic mode. The Young and the Restless spoilers say Phyllis will send an alarming message, which could be for Nick (Joshua Morrow). He’ll take charge of the situation and try to salvage his relationship with Sharon (Sharon Case).

Elsewhere, Rey (Jordi Vilasuso) will ponder the evidence in J.T.’s (Thad Luckinbill) case. The cover-up gang should start to sweat once he starts poking around. During the week of August 20-24, Rey will be hot on Victor (Eric Braeden) and Nikki’s (Melody Thomas Scott) trail. The Young and the Restless spoilers say he’ll focus on them as his initial suspects and go from there.

Across town, Kyle (Michael Mealor) will make a rotten move. Will he try to sabotage Summer’s chances of winning the bet? Will he double-cross Ashley (Eileen Davidson) instead? Either way, Kyle should be pretty pleased with himself. Summer will make an admission around the same time, so she could confide in Kyle or perhaps keep spreading the ‘Phack” hookup news.

Finally, Mariah (Camryn Grimes) will grow increasingly concerned about Tessa (Cait Fairbanks). It doesn’t look like she’ll have any other contact with her, so she’ll definitely fear grave danger. That dropped call was awfully disturbing, but Mariah won’t know what she can do to help.

Will Mariah eventually turn to someone for advice? We’ll give you updates as other Y&R details emerge. Stick with Y&R and don’t forget to check CDL often for the latest Young and the Restless spoilers, updates, and news.