The Young and the Restless Spoilers: Week of August 13 Preview Video – Blackmail, Flight Risk, Hot Romance and a Shocking Arrival 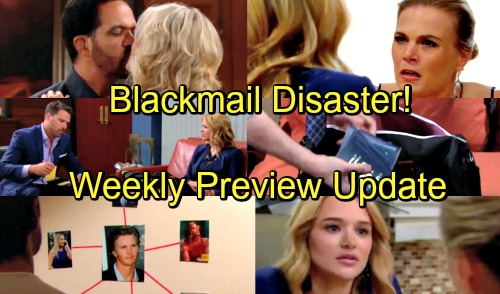 The Young and the Restless (Y&R) spoilers update for the week of August 13-17 tease that some shocking developments are coming up. For starters, Lily (Christel Khalil) will once again try to make peace with Devon (Bryton James). She should really take a step back and let the man grieve, but she just keeps pressing her luck. Lily could get Devon all riled up before the hearing if she’s not careful.

Naturally, Cane (Daniel Goddard) will have another plan. He’ll push Lily to leave the country as a family, but how can she walk away from the consequences of her actions? The Young and the Restless spoilers state that Lily will shut down the idea, so let’s hope Cane doesn’t change her mind. An attempt to escape punishment would just add to Lily’s legal woes.

Later, Devon and Lily’s relationship will shift in a startling direction. Will Devon soften after listening to what Lily has to say at the hearing? Could Lily decide she’s tired of getting so much blame instead? It’s not like Hilary (Mishael Morgan) was a saint. Lily will always regret the events that led to the death of Hilary and her baby, but she didn’t pull a gun out and murder them in cold blood!

Elsewhere, Kyle (Michael Mealor) will hit the jackpot. He’ll stumble across incriminating evidence, which will help with Billy’s (Jason Thompson) takedown and solve a Phyllis (Gina Tognoni) mystery. Summer (Hunter King) will make a surprising discovery with Kyle’s help. They’ll figure out that Phyllis hooked up with Nick (Joshua Morrow), so things are about to get interesting.

In her new nasty style, Summer will use this info to get in Billy’s (Jason Thompson) bed eventually but first she will blackmail her parents! In the shocking new preview video below you can watch Summer in action – what a thankless child.

Over with Victor (Eric Braeden), he’ll have concerns about Nick’s intentions. Perhaps Nick will deliver a wedding invitation and catch his father off guard.

The Young and the Restless spoilers say Victor will call Nick’s motives into question. He may think this is some kind of game, which could easily be the case. However, Nick will probably contend that he’s just proud to be marrying Sharon. He may feel like it’ll prove something if Victor’s there.

Speaking of all the wedding hoopla, it appears Victoria (Amelia Heinle) will rope Phyllis (Gina Tognoni) into being a bridesmaid. She’ll enjoy watching Phyllis and Sharon deal with the drama. Y&R fans will also see Nick do some squirming thanks to his one-night stand secret. He’ll hope to keep Sharon out of the loop indefinitely, but that’s wishful thinking!

Finally, Rey (Jordi Vilasuso) will come to town on a mission for justice. He’ll do some detective work and zero in on the cover-up gang as his top suspects. Rey will also look at Victor as he works to solve the case of J.T.’s (Thad Luckinbill) disappearance. It sounds like this is going to be a hot storyline, so stay tuned for all the fun.