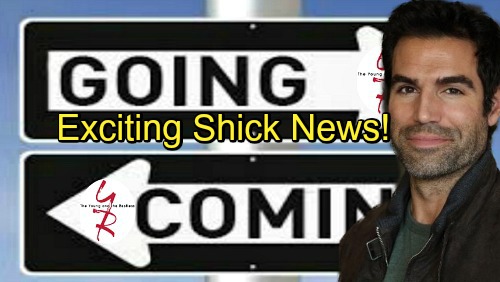 The Young and the Restless (Y&R) spoilers tease that we’ve got some comings and goings news to share. First, let’s talk about a long-awaited arrival. Ever since Y&R first announced Jordi Vilasuso’s upcoming debut as Rey, fans have been curious about his big storyline. It looks like Rey will actually get involve in several hot plots, but his first one will be quite surprising.

On the new Y&R episode, August 17, we’ll get out first glimpse at Rey and what he’s up to. The Young and the Restless spoilers say Rey will look pensive as he examines an evidence board. J.T.’s (Thad Luckinbill) photo will be in the middle, so Rey’s obviously investigating his disappearance.

The pictures that surround J.T. will be interesting as well. It looks like Phyllis (Gina Tognoni), Sharon (Sharon Case), Nikki (Melody Thomas Scott), Victor (Eric Braeden) and Nick (Joshua Morrow) will all be on Rey’s suspect list. Since he’s considering the cover-up crew, Rey’s obviously on the right track.

However, Y&R buzz suggests that Rey will do more than just dig for dirt. He’s most likely Arturo’s (Jason Canela) brother, so we could see a bit of a sibling rivalry. Word has it Rey may be Sharon’s new love interest down the road. There’s even talk of him helping out Tessa (Cait Fairbanks) and Crystal (Morgan Obenreder), so Rey’s definitely going to make a big splash in Genoa City.

Anthony W. Preston will also make an appearance. He’ll show up on the same day as Rey, so there could be a connection. Preston will play a character named Rob, but Y&R’s keeping a tight lid on the details. Perhaps Rob is pitching in with Rey’s investigation of J.T.’s vanishing act – or death depending on how much they know.

In other news, Sharon Case and Joshua Morrow have a Facebook Live chat coming up. They’ll sit down to answer questions from viewers on August 17. These live chats often happen when shockers play out on screen, so we could see a “Shick” explosion in that day’s episode. A hot Friday cliffhanger may be in the works.

Summer (Hunter King) will find out that Phyllis (Gina Tognoni) slept with Nick, so she’ll expose the secret by midweek. Billy (Jason Thompson) will probably be the first to know, but it’s tough to imagine this staying under wraps too long. There’s a chance things will blow up for Nick soon after, so he’d better brace himself!