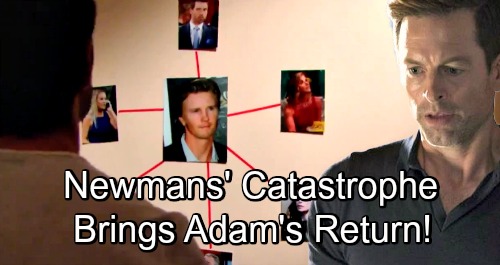 The Young and the Restless (Y&R) spoilers tease that another Newman family crisis is brewing. The trouble will start when Rey (Jordi Vilasuso) shows up in town. He’ll be on a mission to crack the J.T. (Thad Luckinbill) case, so he’ll put pressure on Victor (Eric Braeden) and Nikki (Melody Thomas Scott).

Since Victor doesn’t know that J.T.’s dead, he may welcome Rey’s investigation. Victor’s been under suspicion thanks to that article Scott (Daniel Hall) wrote, so it makes sense that he’d want the truth to come out. However, that’s only because Victor doesn’t know exactly how bad the truth is! His wife and daughter could land in VERY hot water if Rey uncovers too much.

Nikki won’t want Victoria (Amelia Heinle) to get caught up in this, but she won’t be able to stop what Rey’s set in motion. You can bet Sharon (Sharon Case) and Phyllis (Gina Tognoni) will go down as well. There’s a good chance all four cover-up crew members will end up on trial.

The Young and the Restless spoilers say that’ll bring the conclusion of the J.T. storyline, but it’ll also pave the way for more drama. The secret could cost Victoria her spot at Newman and kick off another round of turmoil. Abby’s (Melissa Ordway) thriving at Dark Horse so far, which means she may not want to return to the family business. Nick (Joshua Morrow) shouldn’t be interested either.

Of course, Summer (Hunter King) just isn’t CEO material! She’s more suited for the bedroom than the boardroom. Victor’s not getting any younger, so he really needs to settle on a firm choice to lead Newman into the future. What would happen without a successor? Victor doesn’t want to let everything he’s built start to crumble.

There’s only one reasonable solution to Victor’s problem. The Young and the Restless needs to bring back Adam Newman and finally put the issue to rest. Competition is stiff among the four main soaps, so Y&R needs something big to keep fans interested. Perhaps it’s time to let Adam return from the dead in the form of a recast.

After the next Newman family explosion, Adam could come back on the scene and take control. Would you like to see Adam pop up in Genoa City again? We’ll give you updates as other Y&R news comes in. Stay tuned to the CBS soap and don’t forget to check CDL often for the latest Young and the Restless spoilers, updates, and news.