BY Heather Hughes on March 14, 2018 | Comments: one comment
Related : Soap Opera, Spoiler, Television, The Young and the Restless 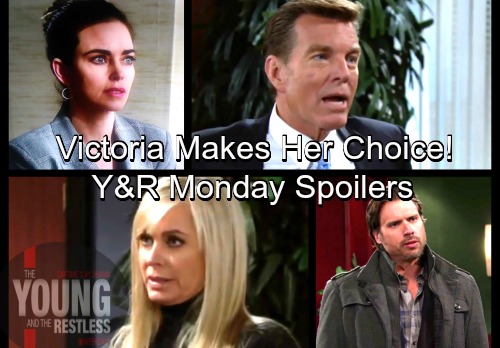 The Young and the Restless (Y&R) spoilers for Monday, March 19, tease that some surprises are in store. In case you missed the announcement or it slipped your mind, here’s your reminder that Y&R will be preempted on Thursday and Friday. March Madness coverage will air in its place, but the CBS soap will make up for lost time on Monday. There’s sure to be plenty of drama!

For starters, Ashley (Eileen Davidson) will make a shocking move. She’ll do something that leaves Jack (Peter Bergman) reeling, so it doesn’t sound like good news. Ashley may soften sooner or later, but she’s still pretty angry right now. It’s doubtful that she’ll back down from her lawsuit anytime soon.

Ashley might move forward with that and stun Jack when she follows through on the threat. He could fear that he’s permanently destroyed their relationship. Ashley may also have some major info to share. In Wednesday’s episode, Victor (Eric Braeden) dropped a bomb on Victoria (Amelia Heinle). He’s forcing her to make a tough choice that affects Ashley.

On Monday’s new Y&R episode, March 19, we’ll likely find out whether Victoria will accept a demotion or leave the company. Ashley suggested she would only return if Victoria was dismissed, but the idea of being her boss might be tempting. Of course, Abby (Melissa Ordway) could take on a more prominent role as well. She was muscled out of her position thanks to Victoria, so she deserves to get some satisfaction.

J.T.’s (Thad Luckinbell) abusive nature is appalling, but that doesn’t mean Victoria should get a pass for her actions. She betrayed Victor and tried to tank Ashley’s career. It’s certainly possible to have sympathy for Victoria and still want her to be held accountable. Whether Victoria is demoted or walks away, she’s going to pay the price.

Other Young and the Restless spoilers state that Nick (Joshua Morrow) will get some startling updates. He saw Arturo (Jason Canela) and Nikki (Melody Thomas Scott) in a hot moment on Wednesday, March 14. Will Nick confront his mom about it? That could be an incredibly awkward conversation, but perhaps Nick will think it’s necessary.

Y&R characters always have to butt in everybody else’s business. That’s especially true when a relative’s involved. The Young and the Restless spoilers say Nikki may explain her arrangement with Victor (Eric Braeden) and argue that she’s just having some fun. She thinks she deserves it after putting up with Victor for all these years!

It looks like a fun episode’s coming up. We’ll keep you posted as other Y&R details emerge. Stick with the ABC soap and don’t forget to check CDL often for the latest Young and the Restless spoilers, updates and news.