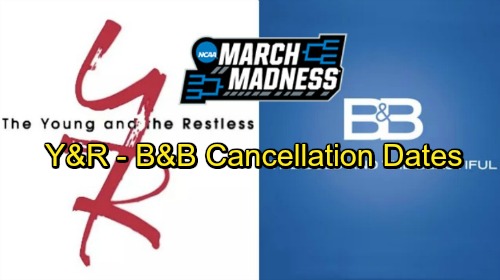 The Young and the Restless (Y&R) spoilers reveal that some hot drama’s ahead in Genoa City. There’ll be plenty of shocking discoveries and ruthless schemes, but Y&R will have to cram them into three days this week. Thursday and Friday’s episodes will be preempted for March Madness, so your cliffhanger will arrive a bit early.

Fortunately, The Young and the Restless will jubut Y&R will return on Monday, March 19mp right back into the action. March 15 and 16 will be devoted to basketball coverage, . There are actually a lot of soap fans out there who love sports as well, so some viewers probably don’t mind this news. For others, it’s an annoyance they’d rather skip.

Either way, it’s happening! March Madness is a big event, so we can’t blame CBS for taking advantage of it. Since many Young and the Restless fans also watch Bold and the Beautiful, we should let you know that’ll be preempted, too. The network has carved out a chunk of time for hoops, so Y&R and B&B will be on the bench briefly.

On the bright side, this might be a chance to support some other daytime dramas. Days of Our Lives and General Hospital will air right on schedule, so why not give them a shot? If you’re a Nielsen family, they could really use the ratings. There are only four soaps left, so it’s nice to show them all some love and keep the genre alive.

As for what’s ahead on Y&R, there’ll be some fierce conflict before those preemptions. The Young and the Restless spoilers say Abby (Melissa Ordway) and Victoria (Amelia Heinle) will face off. Plus, J.T. (Thad Luckinbell) and Victor (Eric Braeden) will be at war soon. Ashley (Eileen Davidson) will also make some vengeful moves, so stay tuned for all the chaos.

It sounds like some exciting scenes are in the works. Which storylines and characters are you loving right now? What changes would you like to see in the future? We’ll give you updates as other Y&R details emerge. Stay tuned to the CBS soap and don’t forget to check CDL often for the latest Young and the Restless spoilers, updates and news.