The Young and the Restless Spoilers: Week of March 12-16 – Dangerous Moves, Tender Moments and Heated Confrontations 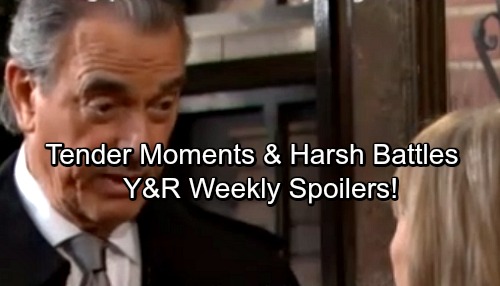 The Young and the Restless (Y&R) spoilers for the week of March 12-16 tease that some startling moments are coming up. Note that Y&R is preempted for March Madness March 15-16 so it is only a 3 day week. For starters, Victor (Eric Braeden) will blast Victoria (Amelia Heinle) for lying to him and framing Ashley (Eileen Davidson). He’ll let Victoria know he’s livid, so she’ll definitely fear the consequences of her actions.

Meanwhile, Devon (Bryton James) will throw caution to the wind and decide to have a baby with Hilary (Mishael Morgan). The Young and the Restless spoilers say Devon will want to begin his journey of fatherhood. He knows that bond is special, so he’ll want to experience it for himself.

However, Devon will warn Hilary about getting her hopes up for more. He’ll want to stick with co-parenting and steer clear of a romantic reunion. Of course, that won’t stop Lily (Christel Khalil) from knowing what’s cooking. Once she hears Devon’s plans, she’ll immediately worry he’s going to give Hilary another chance.

The Young and the Restless spoilers say Lily will vow to halt the whole baby idea. She’ll think if she can do that, she can prevent Devon and Hilary’s reconnection. Lily’s move will really throw Hilary for a loop soon, but don’t expect the wannabe mama to give up.

Meanwhile, Nick (Joshua Morrow) will offer Sharon (Sharon Case) some support. She’ll be dealing with some issues, so she’ll be happy Nick’s willing to help. Y&R spoilers state that a “Shick” reunion will get a little closer. That’s sure to lead Phyllis (Gina Tognoni) down a dangerous path.

Over with the Abbotts, they’ll make the best of a bad situation. Dina (Marla Adams) will get quite confused this week. She’ll believe she’s a young woman again, so she’ll naturally expect John (Jerry Douglas) to take her to the dance. Victor will step up as Dina’s hero by taking John’s spot. Ashley (Eileen Davidson) and Traci (Beth Maitland) will appreciate Victor’s efforts to bring Dina some joy.

Later, J.T. (Thad Luckinbell) will learn Victoria deceived him. He’ll get into a huge fight with Victor, but it’ll probably just be the pre-show. The main event’s coming when J.T. unleashes his wrath on Victoria.

It appears Nick will figure out Nikki’s (Melody Thomas Scott) been sneaking around with Arturo (Jason Canela) as well. Nikki will have a tough time explaining her naughtiness! Stay tuned to see how Nikki handles the awkwardness.

It’s a short Y&R week since Thursday and Friday will be preempted for March Madness, but there’ll still be loads of drama. We’ll give you updates as other Y&R news comes in. Stick with the CBS soap and don’t forget to check CDL often for the latest Young and the Restless spoilers, updates and news.