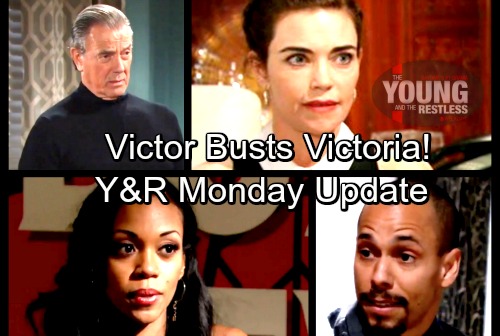 The Young and the Restless (Y&R) spoilers for Monday, March 12, tease that Victoria (Amelia Heinle) will get cocky about her victory. She’ll tell J.T. (Thad Luckinbell) that Victor (Eric Braeden) believed her over Ashley (Eileen Davidson). Suddenly, Victor will appear and point out that Victoria seems awfully confident. He’ll order J.T. out so he can confront Victoria about colluding with Jack (Peter Bergman).

Once she’s backed into a corner, Victoria will come clean. She’ll explain that she had to find a way to get through to Victor. Naturally, Victor won’t be happy about all the lies. The Young and the Restless spoilers say Victoria will wonder what’s next, but Victor will choose to leave her hanging.

At the Abbott mansion, Ashley will get a phone call. It’ll be Victor with an apology. Ashley won’t think that’s enough, so she’ll ultimately hang up on him. However, Victor’s sweet gesture will earn him some points later. Dina (Marla Adams) will get confused and believe she’s a young woman again. She’ll gush about going to the winter formal with John (Jerry Douglas).

Victor will show up and suggest that he’s lucky to be going in John’s place. They’ll head over to Top of the Tower and dance the night away. Ashley will realize this is probably a manipulative move, but she’ll still appreciate it. Traci (Beth Maitland) and Ashley will also share some emotional moments as they consider Dina’s mental state.

Across town, Y&R spoilers say Devon (Bryton James) will babysit Sam. Since Hilary’s (Mishael Morgan) been missing the tot, Devon will let her enjoy a secret visit with him. As Devon gives Sam his bottle, Hilary will mention how good he looks with a baby in his arms. She’ll think Devon truly wants to be a father, so she’ll bring up her sperm donor request again.

Hilary will think maybe they can work out a different kind of deal. She’ll offer to let Devon be a hands-on dad and he’ll admit he’d like that. The Young and the Restless spoilers say they’ll ultimately reach an agreement. Devon will insist that they’ll never be more than co-parents, but we all know he’ll fall for Hilary again soon!

At Crimson Lights, Victoria will rant about Abby’s (Melissa Ordway) latest move. She’ll suggest that Abby took great pleasure in making her sister look bad. Abby won’t deny it. She’ll contend that big changes are brewing at Newman Enterprises. Abby will feel like she’s going to be part of a new dynasty at the company.

Meanwhile, Victor will once again push Ashley to make a Newman comeback. She’ll only go for the idea if Victoria gets the boot. Victor will agree to think about it before turning his attention to J.T. He’ll explain that Victoria duped them both, so that’s sure to set J.T. off.

It looks like some hot drama’s ahead in Genoa City. We’ll give you updates as other Y&R news comes in. Stay tuned to the CBS soap and don’t forget to check CDL often for the latest Young and the Restless spoilers, updates and news.