BY Heather Hughes on March 9, 2018 | Comments: one comment
Related : Soap Opera, Spoiler, Television, The Young and the Restless 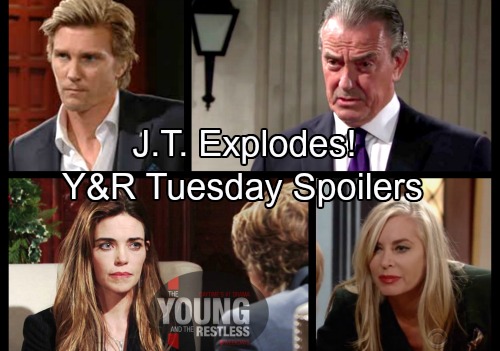 The Young and the Restless (Y&R) spoilers for Tuesday, March 13, tease that Victor (Eric Braeden) and J.T. (Thad Luckinbell) will battle it out. Y&R fans will see major tension and that’s undoubtedly because of Victoria (Amelia Heinle). The fallout of her scheme against Ashley (Eileen Davidson) will continue, so expect some shocking moments.

Victor reveals Victoria’s deception to J.T. on Monday, March 12 so Tuesday will bring a strong reaction. J.T. may not believe Victor right away, but he can’t ignore the evidence forever. Once he starts to buy Victor’s story, J.T. might play the blame game. He could argue that Victor drove Victoria to scheme by hiring Ashley and pushing his daughter’s buttons.

J.T. may insist that Victor’s lack of respect caused this mess. That issue’s been a real source of contention lately. Of course, Victor won’t appreciate J.T.’s angry outburst. It sounds like J.T. had better watch his mouth or he’ll be out of a job. Since J.T.’s on an undercover mission, he certainly doesn’t want to walk away now.

Nevertheless, J.T. finds it difficult to control his rage. His Newman position could be on the line, but Victoria’s safety is what we should really be worried about. The Young and the Restless spoilers say Victoria will face J.T.’s fury soon, so that’s going to spell trouble.

In the meantime, Ashley will retaliate. Will she go up against Victoria or is Jack the one who’ll be dealt a blow? Perhaps she’ll fight back against both! Jack and Victoria clearly deserve whatever Ashley has in store. She’ll do her best to spark some suffering and get true revenge.

Victoria will do damage control on Tuesday, so it’s possible Ashley will spread the word about her enemy’s actions. Hilary (Mishael Morgan) focuses on mostly positive stories now, but this hot scoop might be too juicy to pass up! Regardless, Victoria will have to tackle a tough scandal. She’ll hope she can somehow repair her reputation in the coming episodes.