The Young and the Restless Spoilers: Lily Fears Harsh Sentence, Devon Pushes for 20 Years in Prison – Moment of Truth Looms 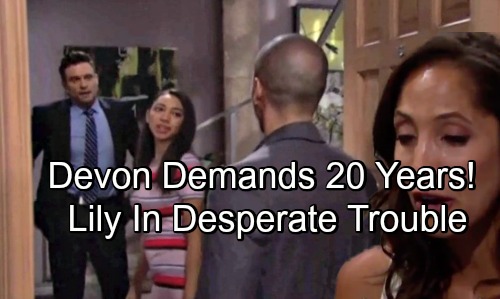 The Young and the Restless (Y&R) spoilers tease that Lily (Christel Khalil) and Cane (Daniel Goddard) will get into an argument. She wasn’t happy about Cane’s decision to hide the truth about the accident. If Lily had known from the get-go, maybe it would’ve been easier to do damage control.

The fact that Cane pushed Charlie (Noah Alexander Gerry) and Shauna (Camryn Hamm) to lie makes this even worse. That’s not the kind of example Lily wants to set. She’ll soon realize she needs to be brave and accept responsibility for her actions. Thanks to Devon’s (Bryton James) ultimatum and her intense remorse, Lily will know what she has to do.

Cane will balk at the idea of Lily turning herself in, but he’ll have a hard time talking her out of it. Even if he can convince Lily to stay quiet, Cane will have to worry about Devon and Shauna. They’re both angry with Lily for taking Hilary (Mishael Morgan) and her kid out of this world.

Nevertheless, Cane won’t want Lily to be ripped away from her family and thrown in the slammer. He’ll urge Lily to really think about this, but she’ll remind him of something crucial. There’s more at stake here than just Lily’s freedom and Devon’s feelings.

If Lily does nothing, the truck driver could go down for this. He may be blamed for the crash and end up in prison himself. Cane will admit he’d be OK with that. If he has to let an innocent man go to jail for Lily’s sake, he’ll absolutely do it. Family comes first for Cane, so he’ll think they have no choice.

Lily, on the other hand, won’t be keen on putting this guy behind bars. Devon will also stick to his mission for justice. When Cane approaches him and tries to change his mind, Devon will simply shut him out. He’ll be done talking about all this. Y&R spoilers say Devon will believe it’s time to act instead.

Devon will plan to speak up at the hearing and recommend a harsh sentence for Lily. He’ll reveal that he’s going to ask for 20 years! Lily is serving as little Sam’s mom now, so he’d be an adult once she got out. She would miss his whole childhood.

Lily would miss out on Charlie and Mattie (Lexie Stevenson) starting their adult lives as well. They’ll probably be getting married and having kids of their own with a decade. Cane just won’t think any of this is fair, but can he stop what’s brewing? The Young and the Restless spoilers say Cane will definitely try!